Not strictly Museum items but it’s nice to look back sometimes.

Again two for the price of one!

As we are all aware, the summer operating season at Chasewater is drawing to a close.  Passenger receipts are down on last year; this is due to not operating the diesel service on the second and fourth Sundays, due in the main to weather conditions and lack of operating staff.  We must all bear in mind that money made in the summer enables the Society and the Company to pay its way in the winter.

Our President Charles Ives was struck down with a coronary attack some five weeks ago.  I am pleased to report to members that Charles is making a good recovery back to normal health.  I am sure that all members will wish Charles a speedy recovery back to full health, and that we all hope to see him back to his cheerful and witty self in the chair at the AGM in September.

Andrew Louch, ably assisted by Roger Pomlett, is pressing on steadily with the painting and restoration of this vehicle, time presses on!!  We still assume that this vehicle is going to the Stockton & Darlington Anniversary.

John Elsley is now painting the exterior in gloss paint in preparation for the S & D Anniversary.  This carriage is now a pleasure to behold!

Excellent progress has been made on this loco, it is now back on all four wheels, the tank has been repaired and painted.  The coupling rods have yet to be fitted.  It is understood from sources that we may see the Neilson steamed before the winter sets in.  A really great show on behalf of our Chairman Derek Luker and committee members Keith Sergeant and Brian Hames, as I have said before, real teamwork!  A vote of thanks to all members who have helped on this project!!

A start has been made in both tidying up the compound, and the painting of station seats and nameboards, etc., this is indeed a vast improvement.  Thanks are due to Colin Marklew, Barry and others.  Keep up the good work!!

The date for the proposed dinner to celebrate the fifteenth Birthday of the Society was given as Thursday, 17th October at 8.00pm at Eaton Lodge Hotel, Rugeley.

This edition of the Newsletter is a special one, it is, as most members are aware, the Society’s Fifteenth Anniversary.  The RPS was inaugurated at a meeting in October 1959 at the Station Hotel, Stafford (now sunk without trace).  Six people were present, including myself.  I had the honour of being elected the first secretary, a job which I continued holding through the formative years, standing down in 1968.   The actual founder of the RPS movement was also present at the meeting, D. Noel Draycott.  Noel was a man of endless enthusiasm, writing letters to the railway press, to the daily press and holding meetings up and down the country.  Noel took over the job of General Secretary of the RPS.  The West Midland District, as it was then known, had the honour of being the first group formed, closely followed by the London District RPS and Scottish District RPS.  These groups are now known as Quainton Railway Trust and Scottish District RPS respectively.  Noel Draycott acted as General Secretary over all the groups and edited the RPS Newsletter, getting news from the groups.  Each group was autonomous and as most members realise, grew apart, particularly after Noel’s death at the early age of 38.  Noel did however sow the seeds of a National group before his death, a body now known as the Association of Railway Preservation Societies eventually evolved.

We are proud of still carrying the RPS name, the original name of the old National Society. 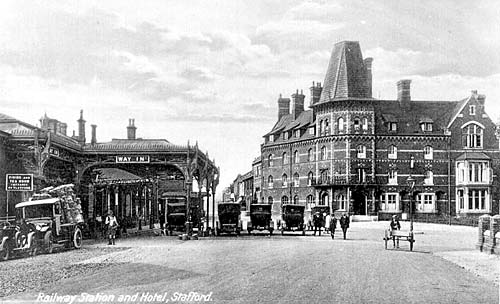 Stafford Station (the third one) and the Station Hotel – from staffspastrack

Then followed the usual progress reports on the Neilson, M & C carriage and the MS & LR carriage – all making steady progress and needing more volunteers!

A very good start has been made in tidying up the site with lamp posts erected, signs and train indicators painted.  The public as well as the members themselves have been impressed; we must maintain this standard and even improve on it.

This was held at the Forum Theatre, Cannock on 14th and 15th September.  This was a huge success, and we must congratulate Andrew Louch, the organiser, for a splendid effort.  Our grateful thanks to all those members who participated, fetching and carrying, working all hours and even staying the night.  A special vote of thanks to Margaret Duffill and the other ladies who so ably assisted our refreshment manager Rob Duffill. 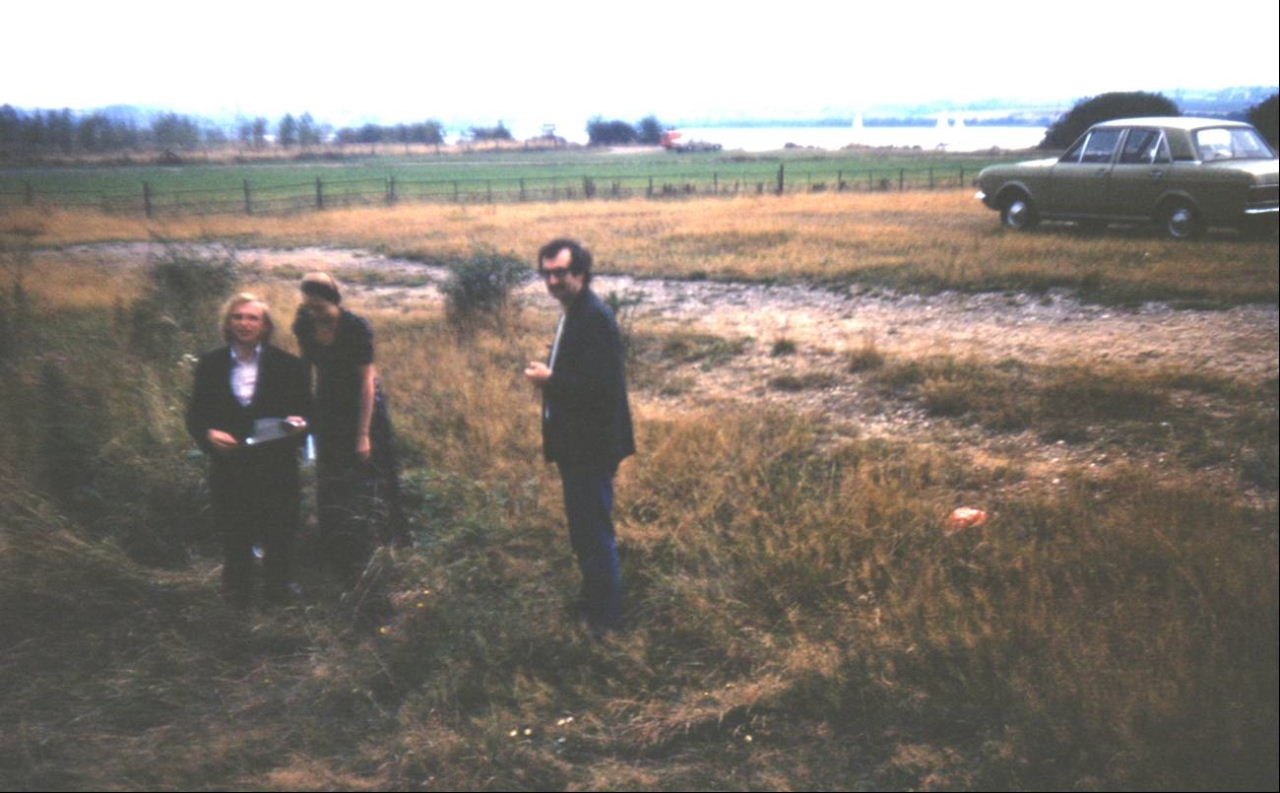 This locomotive arrived on Friday 4th October from Wallsend.  I understand it was late arriving due to tractor gearbox trouble!  It was finally unloaded by the light of Tilley lamps at the crossing and finally hauled to the compound limits by our Worthington diesels.  The locomotive has been bought by our Hon. Secretary Barry Bull, very many thanks Berry, for a very useful addition to the stud. 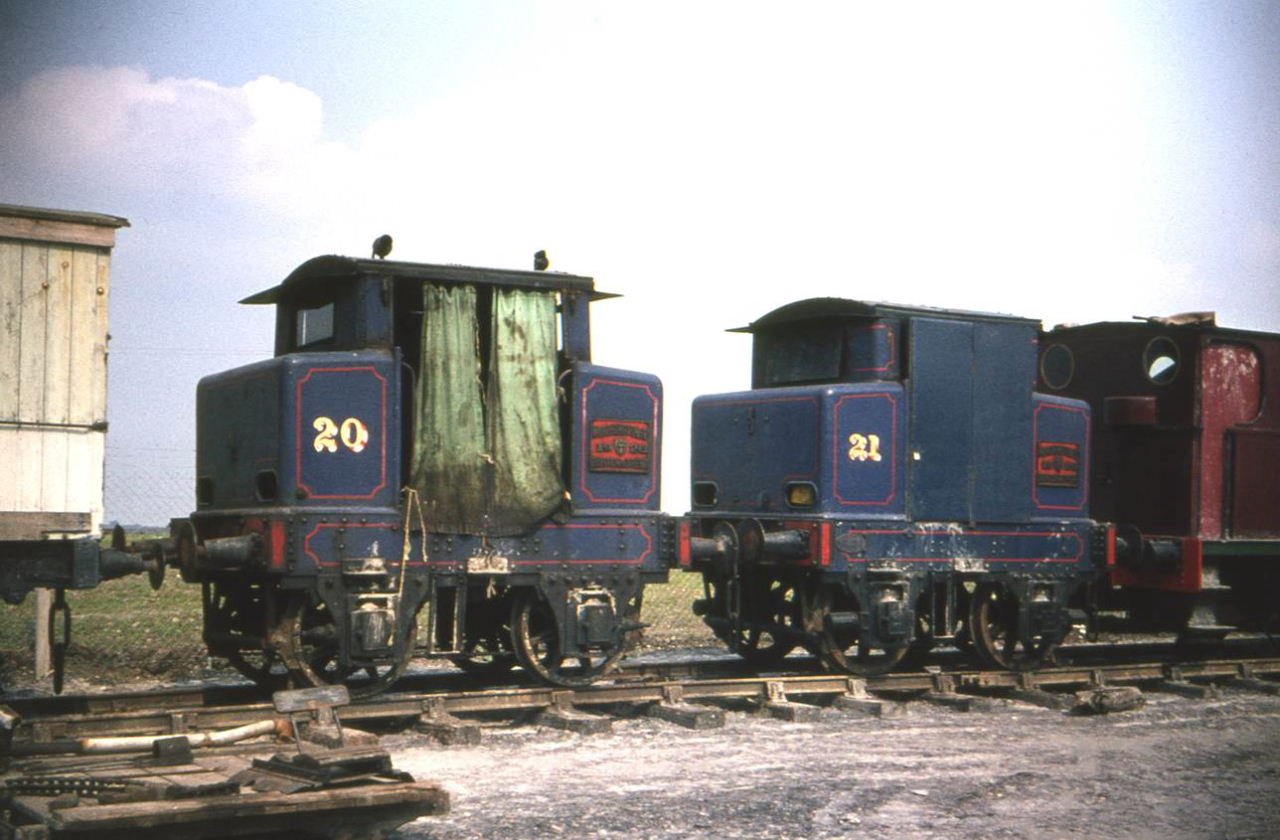 There was to be more news about this loco and about the Fifteenth Anniversary Dinner in the next Newsletter.  I think that this was about the first time that the following Newsletter was referred to.  When I first started my Bits & Pieces from Newsletters and magazines, I knew that there were about two or three missing from 50 years worth.  Sod’s Law dictates that No.11 – the next one – was one of them!

Another couple of bits and pieces from the Railway Forum – Winter 1965.  The first is a display of name and number plates, loaned by one of the members, and laid out in the Royal Saloon – which left Hednesford  in  1970 for the British Railways carriage works at Derby for restoration and then on to the Midland Railway Centre at Butterley. 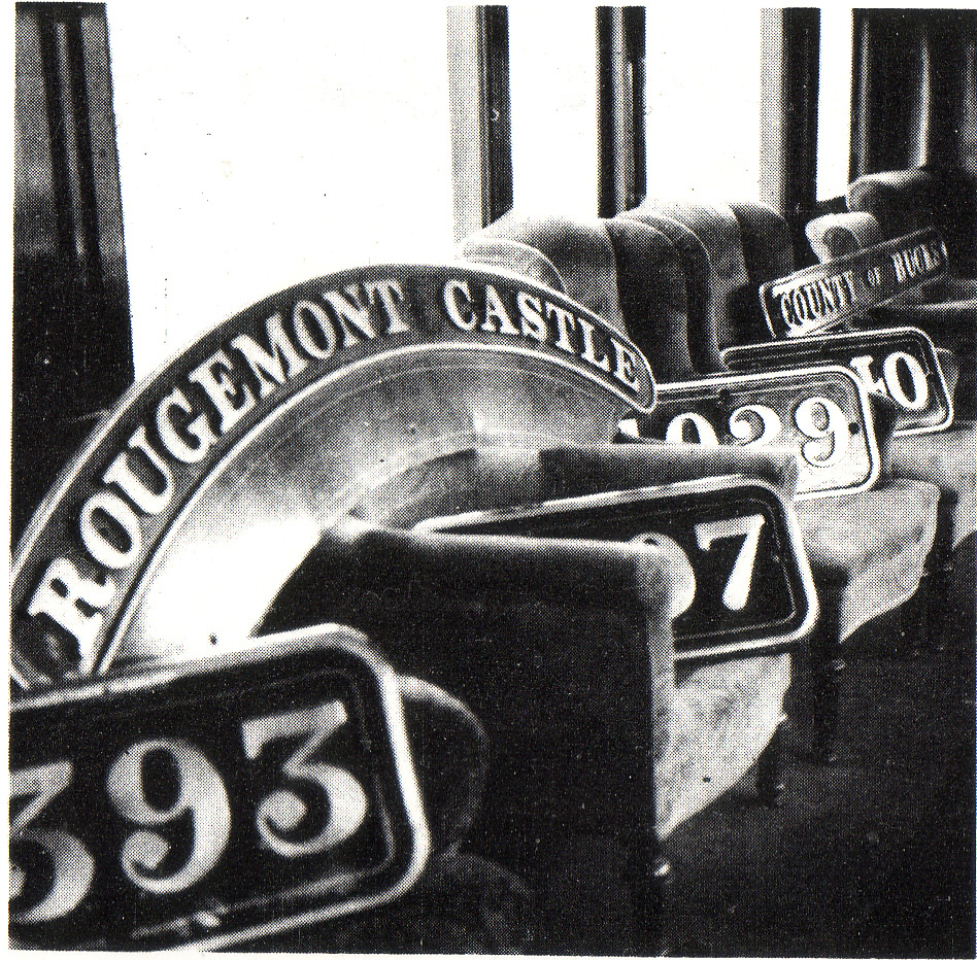 An interesting display of locomotive nameplates and numbers was arranged in the Royal Saloon for inspection by visitors at the Midlands R.P.S. Open Day. 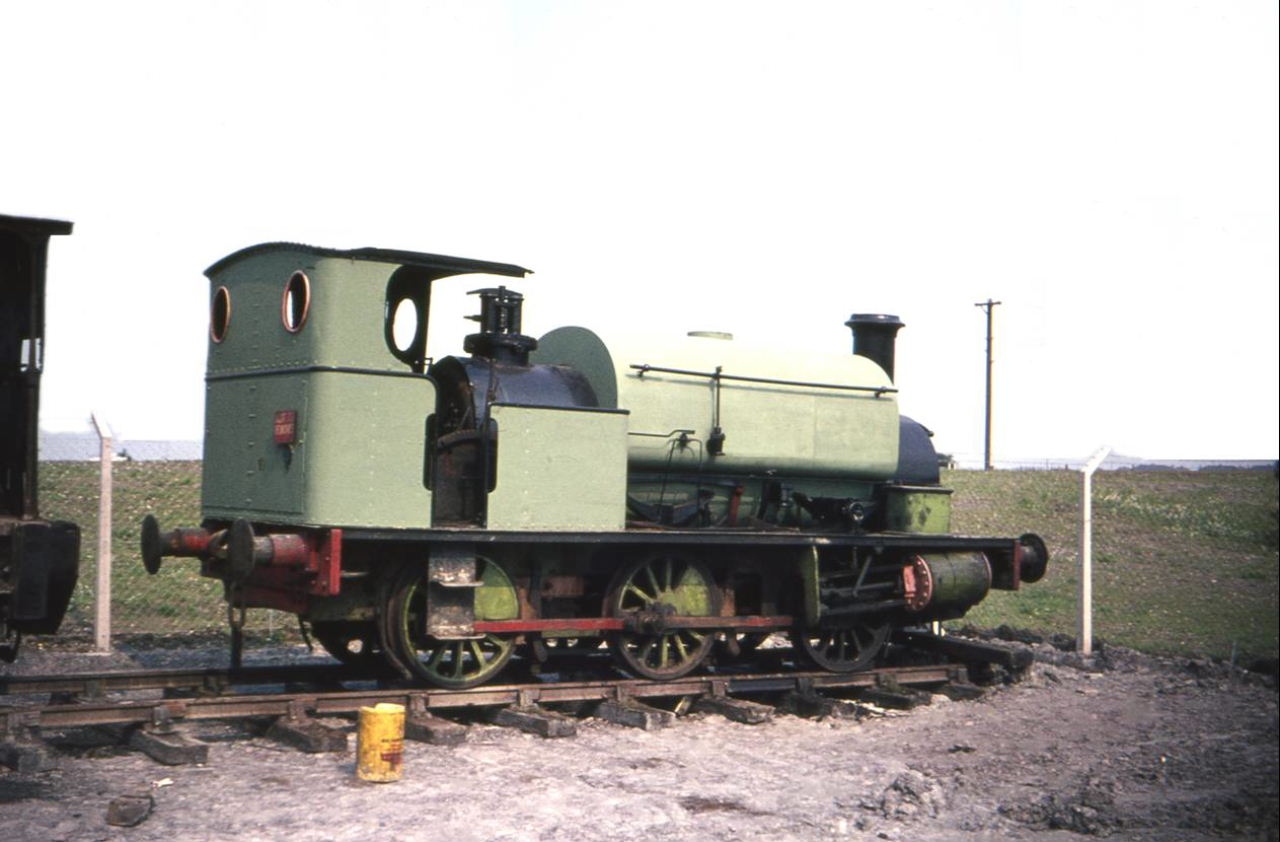 Members of the Midlands area, R.P.S. expect to take delivery of another locomotive later this year which has been acquired through the generosity of one of their members, Dr. P.G. Plummer, who has offered to purchase it for them.

The locomotive is a Hudswell-Clarke 0-6-0ST built for the Sheepbridge Coal and Iron Company in 1895 (Works No. 431).  It was transferred to its present location, Desborough Warren Quarry, Northamptonshire, in March 1951 and was due for withdrawal in July.  It is believed to be the oldest Hudswell-Clarke locomotive still in working order and once carried the number 15.  Now it has no number or name, although known as “Sheepbridge No.25”.

Painted in apple green it should be a valuable addition to stock already acquired, and will be of considerable use at the Chasewater branch line which has been leased by this group.

Two other locomotives have also been donated by the Whitecross Co. of Warrington.  They are Peckett 0-4-0STs of 1900 and 1904 vintage.  They were withdrawn from service by the Company in 1961, being replaced by two Fowler diesel locomotives.  They carried names up to withdrawal, the older being “Baden Powell” and the younger “Lancet” the nameplates of the latter being transferred to the Diesel No.1, and those of the former being acquired by local enthusiasts.  Only “Lancet” will be able to run again.  It is hoped to exhibit “Baden Powell” statically. 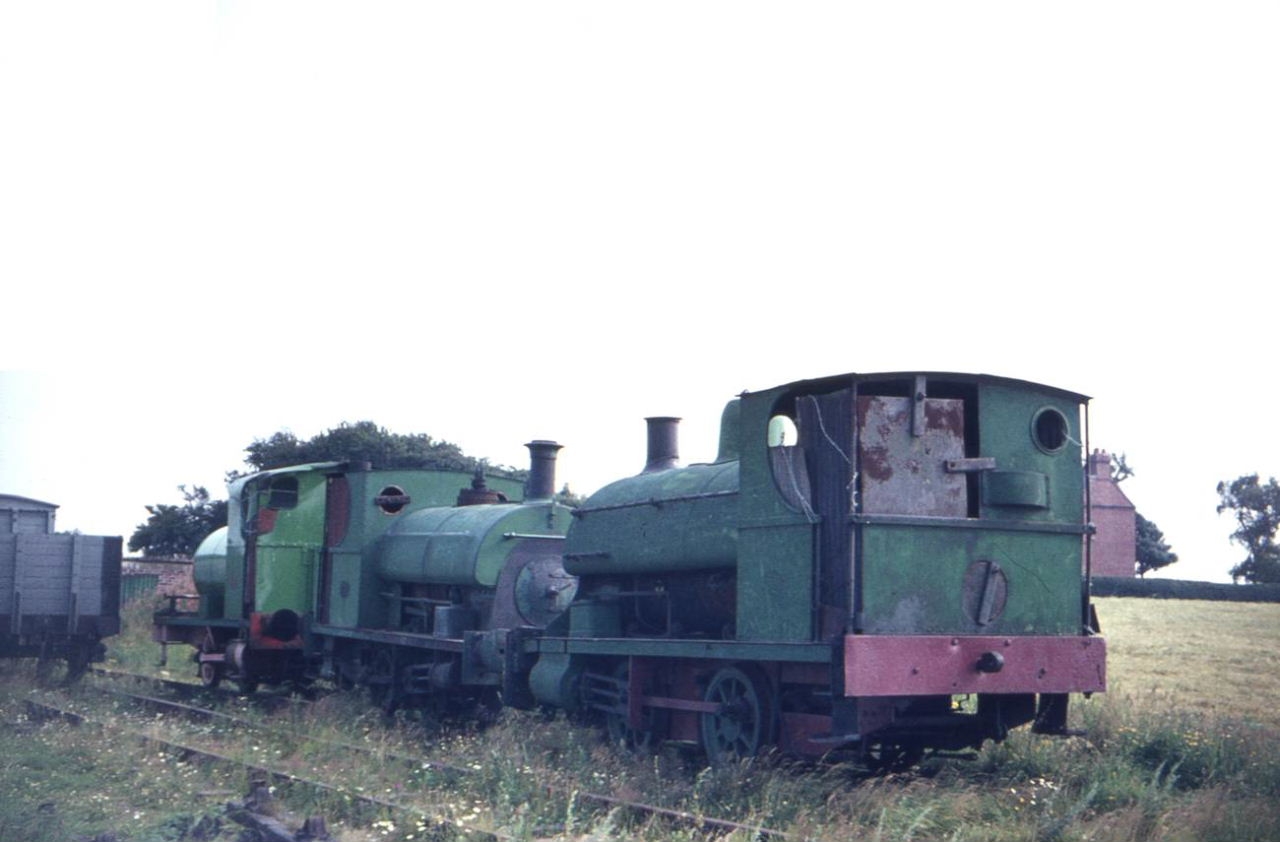 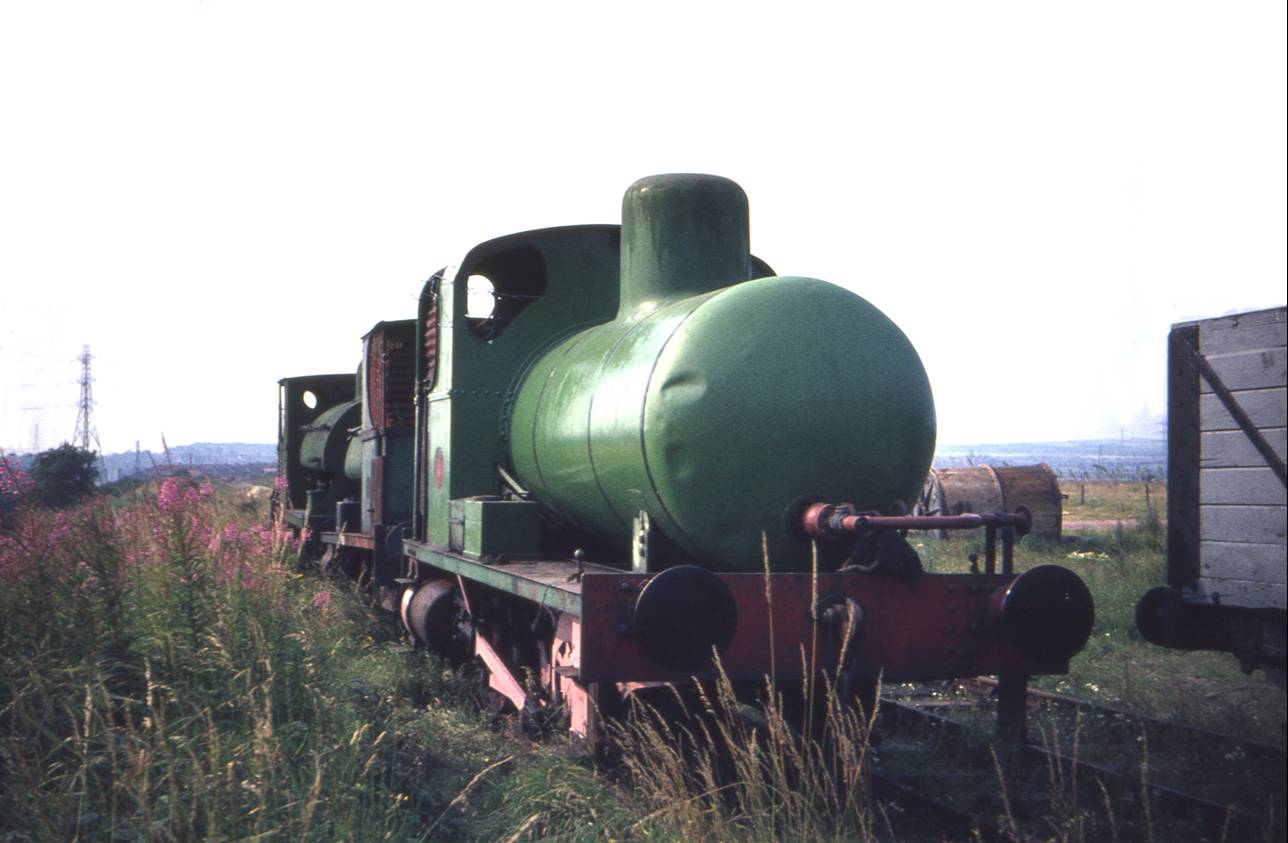 Pictures of three locos from

We believe that Albert Rose would probably have driven these locos at some time during his career at Coppice Colliery and Conduit Colliery. 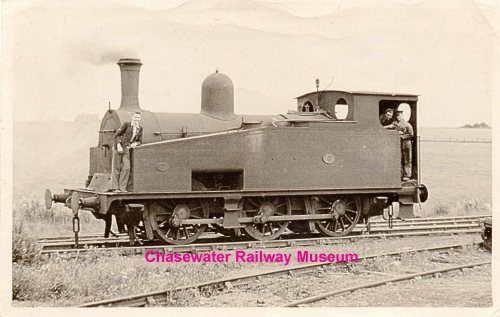 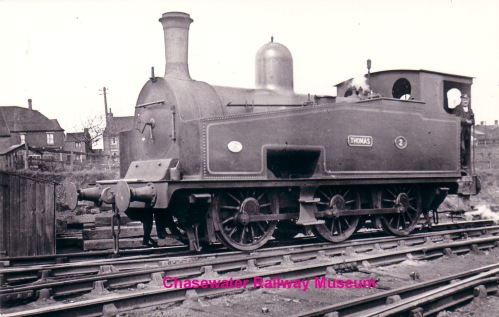 The same Kitson loco with the name still in place. 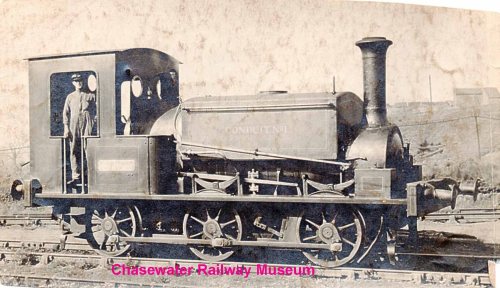 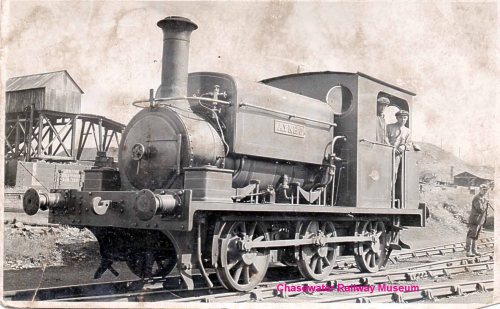 from our photograph collection 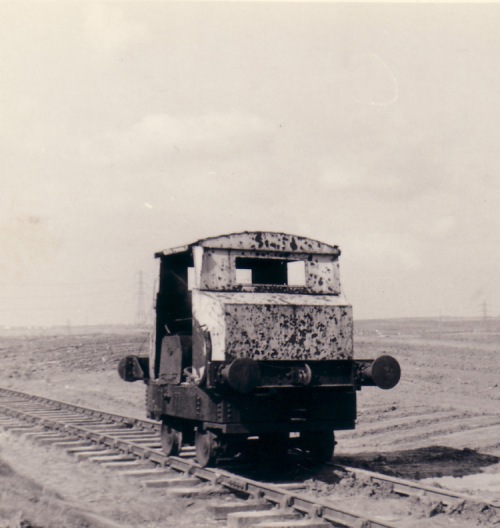 It wasn’t until late 1967 that motive power arrived in the shape of Pittsteel Hibberd No.1.  Development at Chasewater was slow and laborious and it wasn’t until 1970 that all stock at Hednesford had been transferred to Chasewater and the Hednesford depot closed.

Posted in From the Archive, Photograph Collection