Inside the Museum Coach

This was before my time at the railway, it always looks so clean and tidy!

While going through an old photograph album, David Bathurst came across some black and white photos of ‘Sans Pareil’ on one of her visits to Chasewater Railway, round about 2000 – 2002.

Another from Steve Organ’s collection – the man himself!

Another from Steve Organ’s collection

On the right track!  Chasewater Railway General Manager Steve Organ cheers the news that the line extension can continue as Lorne Grey, who is in charge of Centrac’s recycling operations, gives the project the green flag.  July 1998.

Some old photos of The Causeway

Some old photos of The Causeway

We have been given some more old photos, I think from Steve Organ’s collection. These are some photos of the causeway in the early days  at Chasewater Railway .

In 1982 the Preservation Society was forced to lift the track on the Causeway and commence work on an ambitious rebuilding scheme. Sadly owing to the Society’s finances and lack of support, the scheme collapsed and the Preservation Society was forced to close to passenger traffic for a number of years, even though work continued on basic restoration at the Brownhills West site.

A scheme to restore the Causeway commenced in May 1993, with the basic engineering elements being completed some 11 months later. Approx. 120,000 tons of fill material were imported on to the site for grading and compaction. With the completion of one of the largest civil engineering schemes in railway preservation to be carried out to date, work was able to proceed with the opening of Norton Lakeside Station. The station was opened in December 1995.

The bridge through the causeway – long before the culverts!

Buildiing the ground up

Not sure of the location of this photo. 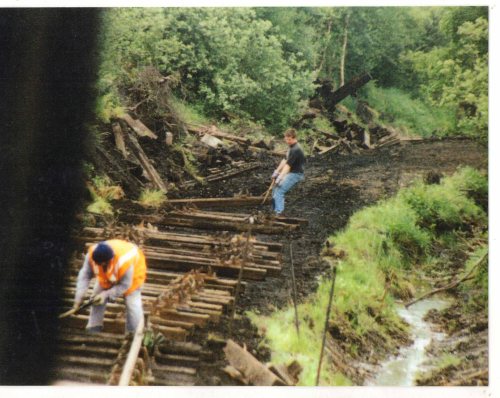 Going round the bend (!) towards Chasewater Heaths.  Looks like Arthur Edwards in Hi-Viz, don’t know the other chap – sorry.

A shot of the pld Brownhills West station with, I believe, Kim Wilkins.

P.Way gang with DL7, I think.  There are two chaps who I don’t know, those I do know are Arthur Edwards, David Bathurst, the 2 don’t knows, then Dave Pearson, Les Emery and, at the front, a young helper, Jim Bates and Andy Clegg – not forgetting Beckie. 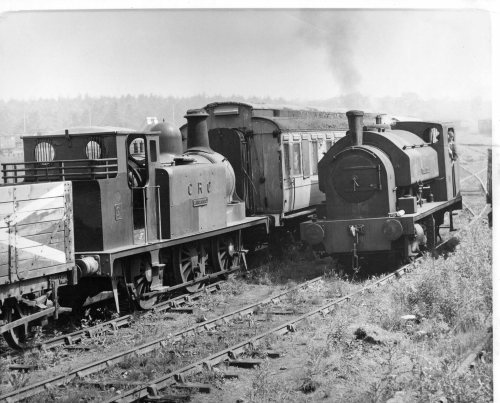 This photo was given to the Museum by Rob Cadman

A very interesting photograph from c May 1970, Railway Preservation Society (West Midlands Division), later Chasewater Light Railway, prior to removal from its original home in Hednesford to its new home at Chasewater.

During the spring and summer of 1970 the stock was moved to the yard of Cannock Wood colliery by NCB locos for ease of loading for the final move by road to Chasewater.  The two bogie coaches were moved by Wrekin Roadways at no cost to the Society.  Other items were delivered to Chasewater by the NCB, the only charge being for the move of loco ‘Cannock Wood’.

The vehicles in the photo are: a 7-plank coal wagon, the E1 loco ‘Cannock Wood’ (now on the Isle of Wight), the Midland Railway Royal Saloon, built 1910.  This was loaned to Derby Corporation for the embryonic Midland Railway Project.  It was later exchanged for the ex-Walsall Gas Works Sentinel, some equipment and cash.  This vehicle is now at the Midland Railway – Butterley.  The other steam loco is ‘Hem Heath No.1’, a Bagnall 0-6-0ST 3077 of 1955, ex Silverdale, which actually worked at Cannock Wood.  Between the left-hand window of Cannock Wood and the edge of the photo our Cadbury Van can be seen in the distance.

We have received a number of photographs from Steve’s collection and are sorting out those which will be added to our collection.  There are also photos on other subjects which we may well post over time.

Looking into BHW through scaffold

Looking out of Buffet window

We have received a number of photographs from Steve’s collection and are sorting out those which will be added to our collection.  There are also photos on other subjects which we may well post over time.

The XL list shows all the photos in Box File 10149.  The collection has been with the Museum for some time, many taken by Steve Organ.  There are a lot of very similar photos so we have tried to sort out the ones which are not duplicated.  The first selection shows ‘Sans Pareil’ which visited Chasewater on a couple of occasions in the early 2000s.