The Hednesford No 3 Signal Box nameboard was purchased in December 2018 but was only delivered last week, along with two others.

The signal box was situated near Station Road railway bridge. 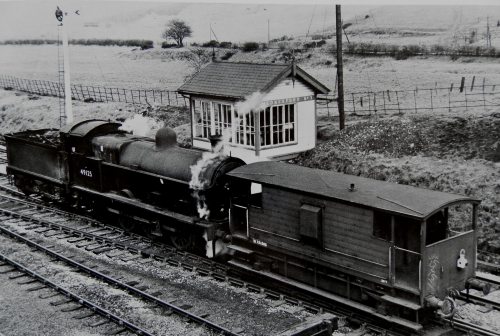 This post was taken from the magazine of the Railway Preservation Societies – the ‘Railway Forum’ Winter 1965.

This picture was taken from the cover of the magazine.

Mr. W. Ives of Hixon, near Stafford, purchased this signal box from British Railways intending it to be preserved by the Midland R.P.S.  Unfortunately contractors taking up the metals of the old Stafford and Uttoxeter Line also demolished the signal box.  Now Mr. Ives (pictured) is wondering where he can get another.  (Photo:  Express & Star, Wolverhampton.)

I’m not sure where this photo was taken, but assuming it’s on ‘our’ line it might be between Norton East Road and Brownhills Road, judging by the position of the houses.  Any other suggestions will be gratefully received!

This, and the other track photos in this post were obviously taken before Chasewater trains were running.

Chasewater was constructed by the Wyrley & Essington Canal Company by building a low dam.  A reservoir 1¼ miles in length was thus formed for the purpose of feeding the nearby canals.

At one time Chasewater was encircled by railways; the earliest of these was the Cannock Chase & Wolverhampton Railway incorporated by an Act of Parliament on July 29th 1864.   A connecting link was constructed from the London & North Western Railway Cannock Chase mineral extension which was incorporated in 1862.

In 1884 a branch was built by the Midland Railway from Aldridge.  This was for mineral traffic, although passengers were conveyed as far as Brownhills.  The passenger service was withdrawn on March 29th 1930.  The direct link with the LNWR was broken in favour of a more circuitous connection via the Conduit Colliery Company’s yard.

With the closure of the Cannock Chase collieries, the Midland Railway branch from Walsall Wood to Brownhills was lifted in 1960, followed by the CC & WR track in 1963, leaving the remainder of the lines as they are today.  These were retained in order to connect the National Coal Board area workshops with the main line.

In recent years the possibilities of Chasewater as a pleasure resort were realised by Brownhills Urban District Council; an amusement park was constructed and facilities were provided for more specialised interests such as go-carts, speedboats, hydroplanes and yachts.

With the increase in visitors each year it was felt by the Midlands area of the Railway Preservation Society that the line would be suitable for development as a working railway museum and a lease of about two miles of track was taken out.  Much work has to be done to bring the line up to passenger carrying standards and it will probably be several years before a regular passenger service can be maintained.  This largely depends on the number of volunteers that are prepared to help with the track restoration.

The immediate aim of the Society is to construct a building to house the larger items of rolling stock where they can be fully restored and displayed to the public.  This building will form the permanent headquarters of the Chasewater Railway.

The Society would appreciate any help, practical or otherwise, from people interested in this project.  With sufficient support a limited service could be in operation by next summer.

We know where this one was taken – you can see the entrance to the farm gate.  The houses at the top were demolished to make way for the M6 Toll. 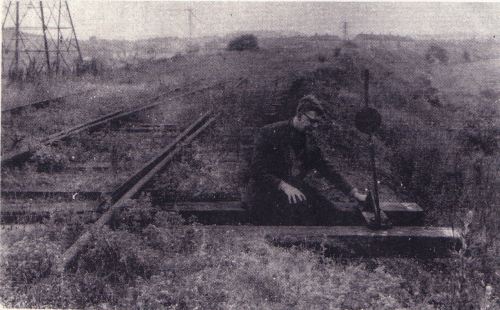 Chasewater Railway Museum – A couple of ‘No Admission’ Notices

A couple of ‘No Admission’ Notices

These ‘No Admission’ notices were fixed to the signal box adjacent to the door.  I can’t see one on this box, but it is a nice picture of the Anglesea Sidings signal box, sited near Newtown Bridge, Brownhills, Staffordshire.

I believe that ‘Anglesea’ can also be spelt ‘Anglesey’, my usual spelling.

These notices have been in the museum for some years so we are not sure whence they came!

The first one is from the Great Western Railway. 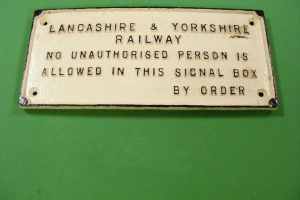 The second one, obviously from the Lancashire & Yorkshire Railway.