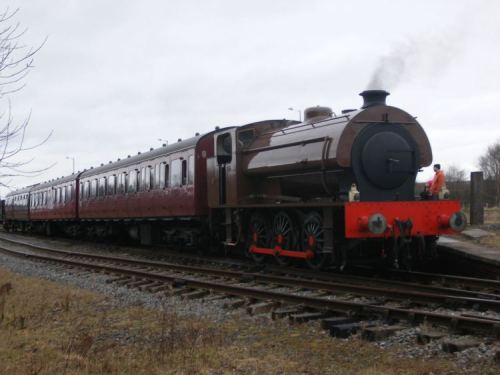 Wemyss No.15 at Chasetown (Church Street)

Hunslet Austerity, a powerful 0-6-0 saddle tank built to a wartime austerity design that latterly saw service as No. 15 on the industrial Wemyss Private Railway in Fife, Scotland

No. 15 is a Hunslet-designed Austerity 0-6-0ST, one of 13 subcontracted to Andrew Barclay. One of only three of the Andrew Barclay-built examples to survive.

This loco came to Chasewater for the February Gala 2008.
The Wemyss Private Railway was a network of lines, sometimes known as the Wemyss Estate Railway. The lines were a group of mineral and other railways in Fife, Scotland, mainly on the land of the Wemyss family. They were built to connect coal pits to harbours and the railway network, for the use of tenants of the Estate. The Wemyss and Buckhaven Railway was built at the expense of the Wemyss Estate and carried passengers; it was later sold to the North British Railway.

When numerous collieries needed a railway connection the Wemyss Estate built a connecting line to Methil Harbour and improved the harbour itself. The local network became known as The Wemyss Private Railway and the Estate’s interest was transferred to the Wemyss Coal Company. These terms have been used interchangeably by authors.

The collieries were nationalised in 1947 and the sidings connections at the pits followed; the main line railways of Great Britain were nationalised in 1948, but the central section, now known as the Wemyss Private Railway remained in private hands. However the mineral activity in East Fife declined and in 1970 the Wemyss Private Railway closed down.

When the loco visited Chasewater Railway, sadly she wasn’t lined out, but in this photo by Phil Trotter, she can be seen in all her glory!