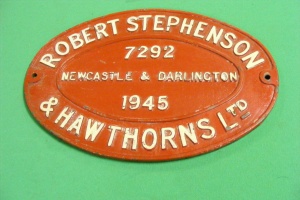 Two locomotive worksplates comprising of a cast iron Robert Stephenson and Hawthorns Ltd, 7292 of 1953 and Hunslet 3789 of 1953 have come to Chasewater Railway Museum, along with the three nameplates already described.

Both locomotives were of the Austerity type, the RSH coming to Littleton Colliery from its previous owner the War Department, in May 1947, originally WD 71483 she became number 6 at Littleton being cut up there in Oct. 1970.