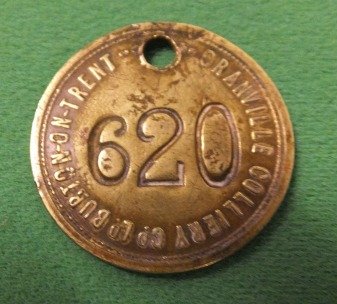 A small addition to the Museum collection of coal miners’ pit checks is a pre-nationalisation of the coal industry example from the Granville Colliery Ltd.

The unusual thing about this particular item is, along with the Company name, it shows the location of Burton-on-Trent, whereas the real site of the Colliery was a few miles away at Swadlincote.

On Nationalisation 1/1/1947, Granville became part of the NCB East Midlands Division No.7 Area and by then only two of the original locomotives remained. For short periods and at different times these two were supplemented/replaced by four Manning Wardle 0-4-0 saddle tanks, a Peckett 0-4-0 saddle tank, and finally a Ruston Hornsby 0-4-0 diesel of 165 horsepower.