The Latest Addition to the Chasewater Railway Museum Loan Items

The Latest Addition to the

The above pic was taken on arrival, the one below was taken on 16-6-2015, after a little(!) attention from Pete Stamper. 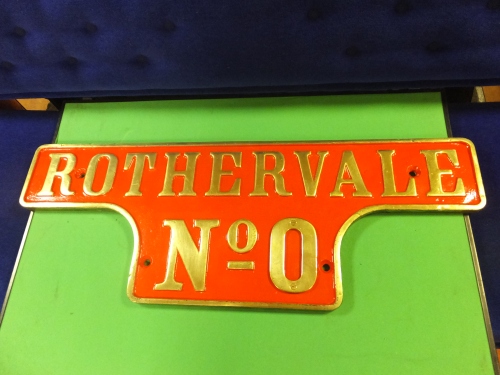 ‘Many industrial locomotives are names or numbered for identification purposes, or sentimental reasons.  For various reasons very few were given the number ’0’.  Perhaps the most famous in this category was locomotive ‘Rothervale No.0’ whose nameplate is displayed here.  The locomotive was cut up in October 1959, but fortunately both nameplates were rescued by Mr. Bernard Mottram.

The locomotive, an 0-6-0 inside cylindered saddle tank, was built in 1879 by Beyer Peacock (works number 1830) in Manchester and became No.1 on the East & West Junction Railway, which later (1909) became part of the Stratford-upon-Avon and Midland Junction Railway.  In April 1890 the loco was sold to the Rothervale Collieries Ltd. and carried its new name ‘Rothervale No.1’ on a pair of cast brass nameplates attached, one on each side, to the saddle tank.  The loco was employed at Treeton Colliery located in the River Rother Valley just to the east of Sheffield.

Further locos were acquired by the colliery and named in a similar manner, i.e. ‘Rothervale No.’ followed by a single digit up to ‘9’, in the order of arrival.  In 1929 a new outside cylinder 0-6-0 saddle tank adorned with the cast nameplates ‘Rothervale No.1’ was delivered from the Yorkshire Engine Co.  It is possible that a mistake was made and it should have been ‘No.10’, (following No.9).  Confusion could now arise because there were two ‘No.1s’ at Treeton.  One of them had to be renumbered and there was space for a single digit only on the nameplate.  The decision was taken to renumber the Beyer Peacock to ‘No.0’, possibly because it was an earlier build than the Yorkshire.  The ‘1’ was chiselled or ground off the nameplate and replaced by a brass ‘0’ digit screwed on in the space created.  Brass ‘0’digits, slightly smaller then those on the nameplate were also attached to cab side sheets.

The photograph was taken on 12th March 1955 at Treeton Colliery by Mr. Bernard Mettam, to whom the Chasewater Railway Museum is indebted, by way of the Industrial Railway Society, for the loan of this most unusual nameplate.

Thanks are due to Mr. Adrian Booth for some of the above information.’

After the presentation of the nameplate by Bernard Mettam to Ian Bendall of the IRS, ( with the Railway’s Mr Bull waiting patiently!) the group adjourned to the Sidings Tea Room to enjoy one of Craig Wilkinson’s excellent Carvery Lunches.

The Industrial Railway Society also  extended the existing loan agreement for the Eric Tonks Collection for a further two years.

The Chasewater Railway Museum is most grateful and proud to house all of these items. 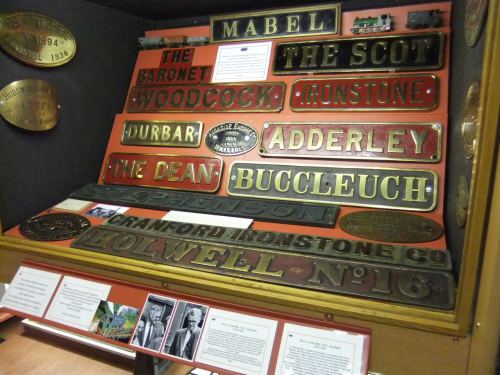