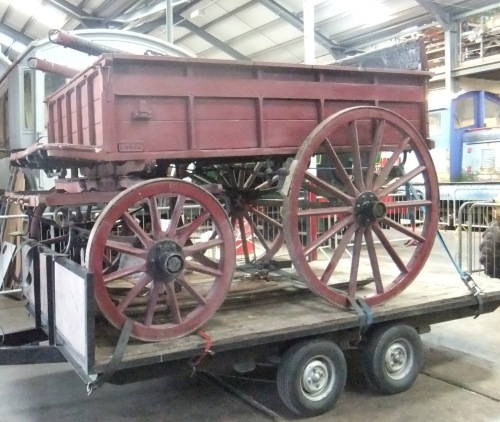 Arriving home – but not under its own horse-power…..

Donated by Earl Lanesborough, Swithland Hall, Leicestershire in the 1960s, going first to Hednesford and then Chasewater.
Its most recent use at Swithland having was as a residence for a few laying hens.
Placed on long-term loan to Shugborough Museum in the 1970s as they could provide covered accommodation. The loan was renewed in 1995.
Returned in very good condition to Chasewater Railway September 1st 2014.

When in for repairs it was normal practice for the LMS to remove old company (in this case, Midland Railway) plates and replace them with LMS ones.  The LMS didn’t exist until 1923. 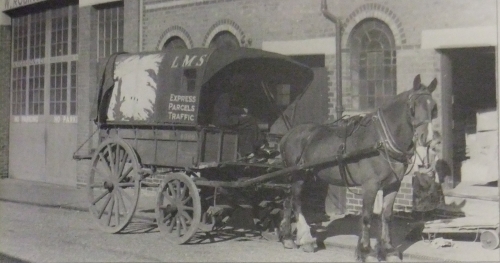 Still in LMS livery and painted in the company’s crimson lake colours, horse-drawn van No.4990 is outside Craddock’s shoe factory, 18 September 1952. Wolverhampton’s railways thrived on the sheer quantity of goods traffic emanating from the town and nearby Black Country. As ‘common carriers’ however, they were obliged to carry anything from heavy plant to small parcels, the latter requiring delivery from the goods yard to the customer, usually by lorry, or as in this case, by horse-drawn van.

The van not looking too happy at the Hednesford Depot