The Society is approaching its 25th Anniversary which will be celebrated at the Society AGM on 13th October and at a Bus Rally and Railwayana Fair at Chasewater on the following day (October 14th) 11.00 – 4.30, admission free.

Throughout its 25 years the Society’s membership has fluctuated around the 100 mark whilst its aims have switched from creating a static museum to an operating railway.  Despite the lack of passenger trains during the last two seasons the Society membership has held its own and so far this year over 15 new members have been enrolled.  To these people we say thank you for having faith in the Chasewater Project.  Inside this magazine you will find a membership form and we are appealing for every member to enrol a new member to give us enough people to operate trains next season (as we are led to believe that we will be in a position to do so).

Members may have read elsewhere about plans to spend up to 14 million pounds on Chasewater Park and the Society/Company have drawn up plans to expand the Railway, should this scheme come to fruition.  All this is dependent on us having enough manpower to run services on a regular basis so it is up to the present membership to either come forward and operate the services or to find new members to do the same.  Members may also have read of a scheme to build a new motorway which may or may not pass through the park.  If it does come through the park then we are wasting our time.

News from the line

Loco Department – It has for sometime been felt that there ought to be a numbering system for locos at Chasewater in order to give a proper Light Railway image.

A start was made some years ago when ‘Invicta’ emerged from a repaint sporting a painted No.8 (it was then the eighth steam engine on site) on the front buffer beam and brass plates (GWR style) on the cab sides.

The following system has been devised and will be put into practice as engines are repainted, although the GWR style plates on ‘Invicta’ will not be featured on other locos as brass plates with the loco number and the legend ‘Chasewater Light Railway’ have been designed.  Some locos will also bear fictitious 21G shed plates as the Operating Superintendent reckons 21G would have been the shed code for Brownhills West (Hednesford Road) had it existed in BR days.

It seems strange to have two No.1s when starting a new system, even if they didn’t stay much longer!

Posted in Bits and Pieces 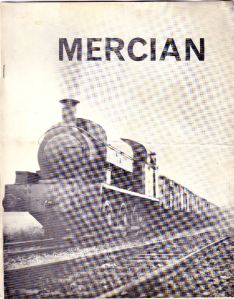 Work has continued throughout the winter and members are now looking forward to the lighter evenings.

A temporary siding has been laid in the vicinity of the platelayers’ cabin, on which the stock that is not normally in use can be stored.  The works train now consists of the ‘Planet’ diesel, which is in the process of being repainted, a Midland Railway flat wagon and a colliery company brake van.

Ditching at the north end of the line is almost complete and it is hoped that work on track re-alignment and clearing will take place later this summer.

Restoration work is in progress on the GWR brake van and NSR open wagon while the Midland Railway passenger brake has received a temporary coat of red oxide.  Much more work has to be done on theses vehicles and anyone prepared to help will be most welcome.

A major step forward fro the Society came a few weeks ago when it was announced that Aldridge-Brownhills Council have finally given us planning permission for our museum at Chasewater.  We have been awaiting this news for several months, and our grateful thanks for all the hard persistent work he has put in to keep things moving with the Council go to our President Mr. Charles Ives.  We are now obtaining estimates from firms so that the building can be started as soon as possible.

Progress on the Andrew Barclay loco at Hixon has been very good over the last few weeks thanks to the efforts of several members.  Painting of the underframes is nearing completion, and it should not be many weeks before the wheels can be put back.  When they are, the rest of the engine can have its final coat of paint and the motion re-assembled.  We are still hoping it will be ready to go up to Chasewater this year, so if you can spare a couple of hours and can use a paint-brush, please go along and do your bit.

We now have both of the Worthington diesels from Burton at Chasewater, fetched by our good friend Jake Bacon, where they have been put through their paces and proved themselves to be excellent machines.

No doubt some members were surprised, and perhaps apprehensive, when it was announced last year in the ‘Mercian’ that the Society had purchased a diesel loco.  A number of working party members put up the £50 to buy it, and our good friend John Bacon transported it from ‘Pitrails’ of Aldridge to Chasewater on his low-loader.  It is a very small machine, built by Hibberds to a very ancient design, and has to be started by means of a handle.

Chasewater No.1 Diesel Loco being painted by Frank Harvey.

Since then it has been used to move track materials and shunt stock.  It has also been used for uprooting bushes and for ditch-digging!

Its mechanical condition was appalling, but has now been improved to such an extent that it is merely shocking!  Its low power and difficult starting caused us to look for a replacement.  We were fortunate in being able to purchase two Hibberd type diesels from Bass Breweries of Burton for the very modest sum of £50 each.  Bob Wormington purchase one, and a number of members donated the other.  The locos are of very robust construction, with modern Dorman engines complete with electric start.  Coupled in tandem they will move any stock that we have.  When they arrive at Chasewater in the near future, old No.1 will be retired as ‘spare engine’ and will once more be ‘stored out-of-use’.

Lest any member be disturbed by this ‘dieselisation’, remember that these are only departmental engines to prepare the track for when the steam engines arrive.  If anyone wants to speed up the return of steam to Chasewater, volunteers are wanted to help with the painting of the ‘Barclay’ engine at Hixon.

A Breath of Wales – N.Hadlow

A breath of Wales came to Hednesford on Sunday 16th April, when we collected a large bi-lingual cast iron notice from Bala Junction that had been purchased by one of our members.   The sign tells passengers to cross the line by the bridge, or as the Welsh version puts it –

and according to the BR invoice it weighed 2 cwts., but after four of us had carried it ¼ mile over a field to the road in the blazing sun, we reckoned it could easily have been 2 tons!  It is certainly nearer 4 cwts.  There are only two signs of this kind in existence, both at Bala Junction, and we would have had them both but for the fact that somebody else had purchased the other one!

Other relics keep on coming in from time to time, such as a GWR hotels fruit salad bowl, GWR luggage labels, forms, appendices to rule books and other paperwork, an LNWR gate notice, GWR and LNWR padlocks and several other items.