A look at a selection of artefacts on show in the museum.

A look at a selection of artefacts on show in the museum. 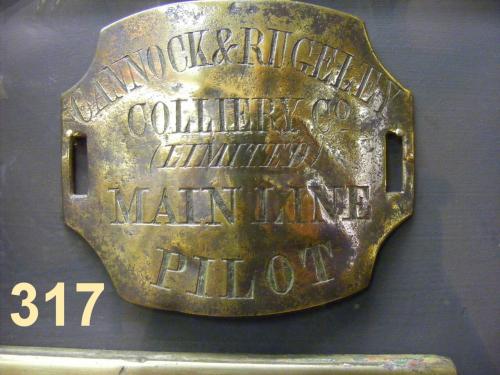 In cabinet C1 is one of our local items – an armband from the Cannock & Rugeley Colliery Ltd., worn by the main line pilot.

This armband was found by a local farmer some years ago, considerably battered and doubled over.  It was not too far from the site where the Staffordshire Hoard was found – but sadly only made from brass! 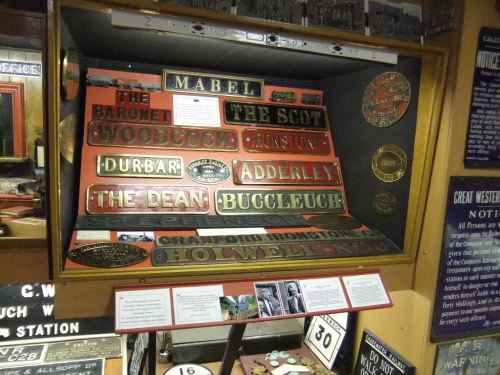 Cabinet C4 contains a collection of locomotive nameplates and builders plates on loan from the Industrial Railway Society.

With the exception of the nameplate ‘Mabel’, bequeathed to the I.R.S. by Rodney Weaver, the collection was amassed by Eric Tonks MSC, FRIC, Dip Maths, (1914 – 1994), a founder member of the Birmingham Locomotive Club, forerunner of the Industrial Railway Society of which he was President for almost 25 years.

By the pillar in the far left corner as you enter the museum, is the chimney off the furnace in the tin-smith’s shop at the GWR Stafford Road Works, Wolverhampton.

On the wall next to the previously mentioned pillar is a Midland Railway warning notice – a ‘Stop’ sign from Derby No. 4 loco shed, dated October 1921.

In cabinet 18 is a carriage door ventilation panel, with an advertisement for luncheon and tea boxes, another GWR item.