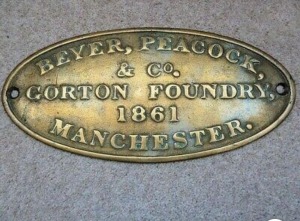 The Museum grapevine has been working well recently.  Anthony Coulls of the National Railway Museum called Mark Sealey about a worksplate off a Cannock Chase Colliery locomotive, Alfred Paget on EBay.  Mark passed the message on to Barry Bull, who signed up to EBay and eventually won the plate.

Following advice from Rob Cadman we came to the conclusion that the size of the Beyer Peacock worksplate on EBay and purporting to be off Alfred Paget didn’t quite measure up. A fraction smaller than details in the Buckle and Love worksplate book gave the game away that likely a copy of the original with if correct the usual shrinkage to be expected.  We are grateful to Rob Cadman for his research and pointing this out. However with this in mind I enlisted Rob to help with a low bid, and can report success at £104 . It is certainly possible maybe even probable that the plate was copied from an original in the NCB Chasetown workshops in the 1950s at the time when the seller’s father was employed there.

Rob has collected the worksplate from Roy Fairbanks who lives at Shire Oak.  His father Freddie Fairbanks was a loco fitter at Cannock Chase and as the pits closed he went to the Chasetown workshops. He died in 1984 and son has had it since, seems he expected it to realise £30 or so. Now Rob has it he’s coming round to the idea that it may be original. He’s now swayed to thinking it is.

It has now been decided that the Beyer Peacock 1861 worksplate is indeed an original off CCC Co loco Alfred Paget.  A good few days all round.

The original ‘Alfred Paget’, an 0-4-2ST No.204/1861, was acquired new, scrapped by NCB at Chasetown circa 1952.  ‘Paget’ was the family name of the Marquis of Anglesey, one of the major land-owners in the district, and Chasewater Railway has kept the name – now on a Neilson engine.