Chasewater Railway Museum Bits and Pieces No.9 More from the Early Days – From 1960 April RPS Newsletter Vol 1 No.4

More from the Early Days 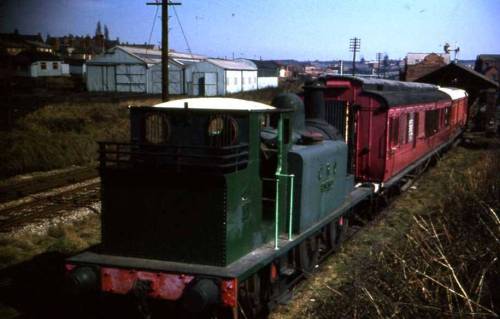 This picture shows the old headquarters in Hednesford.  The building which the carriages are partly inside is still standing, although it is bricked up now.  The white buildings on the other side of the line to Rugeley was the wagon works – long gone.

Mr. G. T. Cox,  WMD Chairman, opened the meeting at 3.00pm.  He expressed his regret that there were not more people present, and said that possibly the unusually fine weather had diverted persons to outdoor pursuits.

Mr. Cox went on to say, “Many of us often look back to the bygone days.  We younger ones can only remember the pre-nationalisation days, whilst older ones can remember quite clearly the pre-grouping companies and put down their memories in black and white.”

“The best way of showing any exhibition piece is in its natural surroundings, and this is what the RPS means by a ‘living’ museum.  You will not get one by asking, but you will if you support the RPS to the best of your ability.  There is little preserved in contrast to the vast scrapped during the last 50 years.  It is within our reach to extend the range, if action is taken now.”

The General Secretary, D. Noel Draycott, briefly described the origins of the RPS and the district organisation which gives local groups the chance to build p local collections.  The first programme for the WMD has been drawn up, covering the purchase of rolling stock and other large relics.  The programme is divided into three stages, but it is not necessarily the order in which items will be purchased.  The selection of relics depends on the speed with which our funds grow.

Mr. R. De Lacy-Spencer pointed out that many relics were kept by persons who did not realise their historic interest to railway enthusiasts.  An example of this was the Midland Railway stationmaster’s hat which had been presented to the RPS by a lady living in Lincolnshire.

The WMD Secretary, D. A. Ives, gave an account of progress in the area.  Membership was growing and a keen committee were considering more plans for the future.  Members were contributing many smaller relics, and a good selection was on view.  He had been corresponding with BR for some time about a possible depot site, but with no result to date.

Mr. F. J. Harvey read a branch line survey he had recently made.  It was an account of the present condition of the MR branch from Aldridge to Brownhills and Chasewater.  The civil engineering features appeared to be in good condition, but the permanent way was neglected towards the end of the branch and part had been lifted.  At present only a section of it was used for a daily freight trip.

The meeting was wound up at 4.30pm and Mr. A. Holden from the audience proposed a vote of thanks to the speakers which was carried.

We are pleased to announce that negotiations for the establishment of a depot have reached a definite stage.  The site is at Hednesford, about 11 miles from Wolverhampton, and contains 150 yards of siding, part of which is under cover.  Fuller details were given to members at the visit to the Stafford/Uttoxeter branch on Sunday, March 27th.  These details are not to hand at the time of writing this, and a description with information about working parties will appear in the next issue of the newsletter.

This will enable the WMD to launch an intensive campaign to purchase rolling-stock, etc., of the Cambrian, Great Western, London & North Western, Midland and North Staffordshire Railways.  All persons interested in these railways are invited to send donations direct to the West Midlands Treasurer, RPS.