More about the armchairs.

Our curator, Barry Bull, has compiled further information about the armchairs, recent arrivals at Chaasewater. 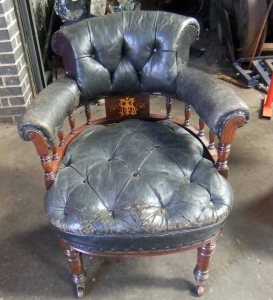 After information received from Lawrence Hodgkinson a little more light can be shown on the two Manchester, Sheffield & Lincolnshire Railway armchairs recently arrived at Chasewater.

The chairs were originally acquired following a tip-off by Ian Smith, signalman and one-time Secretary of the Scottish Railway Preservation Society.  The armchairs, with others, were in the MSL Rly Directors’ saloon carriage and retained in this 1890 Gorton Works-built vehicle throughout its working life.

In its later years the saloon ended up as the District Engineer, Edinburgh Inspection Carriage No. SC 970113E.  Preservation was mooted but following accident damage in 1968, severe enough to result in its withdrawal and scrapping, some of the internal furniture at least  was saved, including the  two armchairs now at Chasewater, after many years in storage with Mike Lewis – to whom our thanks. 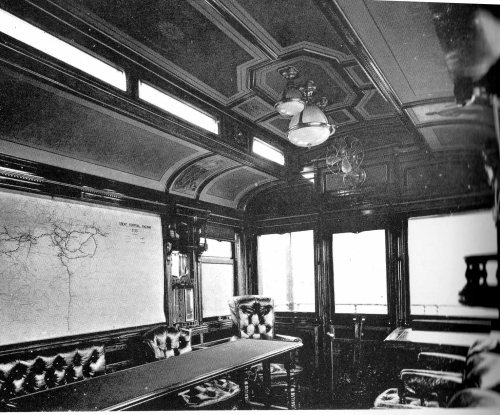 During Great Central days some modernising touches were given to the Directors’ saloon No 1033, which had been built by Parker at Gorton in 1890.  These included a big roller map of the system in 1913, to be seen on the left of this photograph of the larger of the two main compartments.  Photo:  George Dow collection

So far as coaching stock is concerned the palm for active service must surely go to Watkin’s saloon No 1033 which finished up as the inspection car of the District Engineer, Edinburgh, No SC 970113E.  Apart from its Gresley bogies and a modernised galley its original condition was unaltered when it was withdrawn for scrapping, because of severe damage in an accident, in the early part of 1968, at the ripe old age of 78.  Photo: George Dow Collection