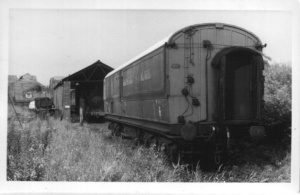 Anyone who has been reading this blog may have noticed, in ‘Bits & Pieces’ in the 1970s and early 80s, the mention of a Travelling Post Office (TPO). Our museum curator has recently acquired a book for the museum’s reference library – ‘An Illustrated History of the Travelling Post Office’ in which the Railway Preservation Society’s purchase is mentioned. It was bought for £200 and housed at Hednesford, later being transferred to Chasewater and sold in 1983 for £1,000,

Everyone notices, even more so now, that Diesels are rapidly taking over and replacing steam on most trains.  If you are lucky you might chance to see a ‘Scot’ or even an ‘A4’ on a goods or shunting.

While standing on Welwyn Station the other evening Sir Nigel Gresley came thundering out of the tunnel with a south-bound express; a marvellous sight I might add, never to be replaced once the ‘Green Devils’ have fully taken over.  Sir Nigel would turn in his grave and shudder at the thought of his own engine being degraded to trundling goods trucks, let alone shunting them.

I suppose this is almost inevitable under the present modernisation plan, all we can do is wait and see what will happen.

In the event of the following, I think that he would have been immensely proud!

In 1937 the London and North Eastern Railway built its 100th ‘Pacific’ locomotive and the Railway honoured its designer by giving the locomotive number 4498 his name, Sir Nigel Gresley.  The locomotive was initially allocated to London Kings Cross ‘Top Shed’ where it returned in the 1950s after a spell at Grantham, by then carrying its British Railways number 60007. In this period it became associated with driver Bill Hoole and in 1959 Sir Nigel Gresley, driven by Hoole, achieved a post war speed record for steam of 112mph. The locomotive finished its British Railways career in Scotland, having run approximately 1,500,000 miles in revenue-earning service over some 30 years. In 1966 the locomotive was saved by a group of determined people, who set up the A4 Preservation Society.  This became the A4 Locomotive Society Ltd, which underwent a further evolution into a registered charity as The Sir Nigel Gresley Locomotive Preservation Trust Ltd.

After its 4th major overhaul in the ownership of the Trust, 60007 is now based at the North Yorkshire Moors Railway and continues to run on the UK main line network from time to time hauling rail tours to locations as diverse as Chester, York, Carlisle, Bristol, London and Dundee.

The Trust is dedicated to keeping the locomotive running, both on heritage railways and on the main line.  She is part of this nation’s history and our aim is to keep the locomotive as living history.  It is only when a locomotive is in steam and in action, truly alive, that you experience the full glory and feel the magic.  Nothing can match the spectacle and magnificence of a great steam engine running at full speed.  That is what the Trust aims to maintain.

The down side is that keeping a big express locomotive in good running order takes a lot of effort.  Sir Nigel Gresley is now over seventy years old.  There always seems to be something wearing out!  Dirty and often very hard work, too – her parts tend to be large, solid chunks of metal, immensely heavy to lift.  On top of the day-to-day repairs and maintenance, the locomotive must have a regular ‘heavy’ overhaul – every seven years if she is to run on Network Rail, extending to a maximum of ten when running on private railways.  The latest heavy overhaul took place at Grosmont on the North Yorkshire Moors Railway, at a total cost of around £800,000.  This has included fitting TPWS and OTMR safety systems to meet the latest Network Rail standards.  The Heritage Lottery Fund has supported this overhaul with a very generous grant of £322,000.

Whether operating on heritage railways or in full cry on the main line, she turns heads wherever she goes!

Reproduced with the permission of The Sir Nigel Gresley Locomotive Preservation Trust Ltd.” 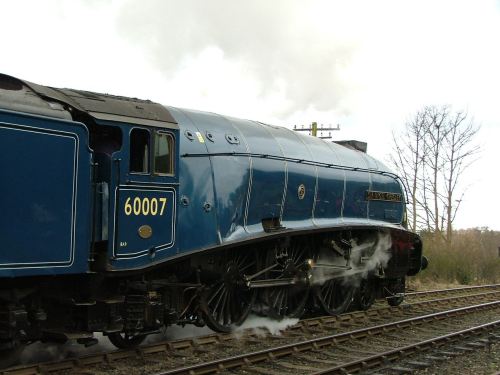 The West Midland District, Midland Area, acted as hosts on Saturday, 19th May for a full RPS meeting which was held in the TPO at our Hednesford depot.  We were pleased to welcome D. Noel Draycott and David Alexander London District, James Slater North West and John Harvey East Midlands Districts.   The meeting was also attended by some 12 members of the West Midlands.

A general discussion took place, and Society policy agreed upon.  It was agreed that the next Society conference should be held in York on 22nd September 1962 (provisional).

The visitors enjoyed a visit to Chasewater the following day (Sunday), and a general inspection of the Depot in the afternoon.  I should like to thank very sincerely all members (Wives and Mothers) who offered such excellent overnight hospitality to our guests.

Work still continues at a steady pace each Sunday, we should still like to see a few more people attend however.  The Midland Block instruments and bells are now in working order, these were wired up by Peter Dring.  Any other member who is interested in telecommunications should come along to the depot and chat with Peter.

John Elsley and Terry Jones are now attempting to fix the side rode on the Coal Tank, all you loco enthusiasts – now is the chance to offer some practical help!

Work on the TPO still continues, this work is being carried out by Frank Harvey, Nigel Hadlow, George Cox and myself.  Tony Lewis and Bob Wormington continue to press on with repanelling the Maryport & Carlisle coach and are making steady progress.  The Midland horse-drawn van is being slowly renovated by Arthur Chatfield, please give him a helping hand someone?

Brian Kinder and Maurice Harper have made a good job of waterproofing the Great Eastern roof in the vicinity of the stove chimney pipe, Bob Wormington has also worked on the GE brake and painted the roof with bitumastic paint.

In my report in the last issue of Mercian I seemed only to complain about the financial state of affairs.  I am afraid this must be the main theme thence in this report too.

(Nearly 50 years on now and nothing seems to have changed!! – but we’re still here!)

Results from our membership campaign have been good during these last few weeks, although the Crewe excursion was not fruitful, I must mention Michael Gubbins and David Webb who made the trip so enjoyable.

The major activity at the moment is the collection of many small relics and various photographic surveys are being completed, notably around Nottinghamshire by P. Gibbons of Southall.

The London District of the RPS has been renamed The London Railway Preservation Society covering North London and three Home Counties, namely Essex, Hertfordshire and Middlesex.

The trip to Wolverton was very poorly attended, eight members making the effort.  We do hope that this can be improved on for future visits.

The last passenger train will run on this line sometime in June.  This branch, as some members will be aware, is a very interesting one.  Please give us your support.

A fund has now been launched to buy coaching stock; this will be published in the general railway press.  Vehicles under consideration are as follows: The Midland Royal Saloon, L & Y Inspectors Saloon, ECJS Bogie coach in original livery.  Other coaches which could be added are: Cambrian Bogie Coach, GWR Clerestory Bogie Coach, and WCJS Bogie Coach.

Our Hednesford Depot and Webb Coal Tank were mentioned on BBC TV’s Railway Roundabout of May 20th (my 19th birthday!! – seems a long time ago!) by John Adams and Patrick Whitehouse who said they might look in on their way up for a game of golf!

It has been officially stated that Paddington Station will not be closed yet!