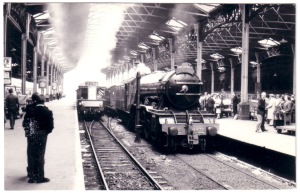 The Flying Scotsman, 4472, certainly gets an airing in its ‘preserved state’, as many Societies now take advantage of hiring out this fine loco for their Specials.  Mr. Pegler has done a fine job in purchasing it for preservation. The RPS is most proud to have’4472’ to head its Great Central Special on June 15th which we are hoping will bring the Society much publicity and many more members.

As there has not been a ‘Mercian’ for some time now my report covers quite a few months of work at the depot.

Despite the Wintry conditions that prevailed in the early part of this year, small parties continued to press on with restoration work on the Maryport & Carlisle coach.  This consisted in the main of burning off the paint in two of the compartments and sanding down in preparation for priming paint.

The next job consisted of reglazing the windows in the same compartments already mentioned.  Some good work has also been done by two members renovating old books and documents that we have in our possession.  This is vital work!  As we all know, these items are completely irreplaceable.

The Webb Coal Tank continues to get regular attention and maintenance.  An excellent job has been made of the cab fittings by Mr. and Mrs. Roger Bell (Princess Elizabeth Fund) and all members join me in expressing their appreciation and thanks for their much devoted labour and wish them luck with their Princess Fund.

Although the Railway and Model Press are carrying details of the GC trip, we would like here to give members a brief reminder.

The train will now depart Sheffield Victoria 8.50am and not 9.00am as previously advertised. There will be refreshment car facilities on the train, and also a short souvenir history of the Great Central Railway.

On the outward journey it will call at Chesterfield Central (if the loop is still open), Nottingham Victoria, Loughborough Central, Leicester central, Rugby Central, Woodford Halse, Quainton Road, Aylesbury Town, Harrow-on-the-Hill and Marylebone, with four hours stay in London, during which time a visit will be made to the BTC Museum at Clapham as both large and small relics are now on display.  On the return journey call at Rugby, Leicester and Nottingham only to set down passengers.

The motive power will be 4472, Flying Scotsman, (by courtesy of Mr. Pegler) and coaching stock ex-LNER. Members who have not yet booked and would like to travel on this train may be lucky to get a ticket at this late date.  But it should be noted that seating accommodation is strictly limited.  For further information and details please contact Mr. E. Cowell, Sheffield, using the form which was enclosed with ‘Forum’ immediately. Our thanks and appreciation go to Mr. Cowell for the wonderful effort he has made to organise this trip in spite of a recent injury to his back.  We hope it is a great success and that many more trips of this nature spring from his idea.  The proceeds after expenses are to go to the Carriage & Wagon Preservation Fund.

Members will probably have already read in the Railway Press that the Society is holding an open weekend at the depot.  It is hoped that members will give this function their utmost support, a lot of hard work has been put in by the ‘faithful few’ and we do appeal to the less active people to give a hand to act as stewards, etc.

Remember that these events are designed to give people an idea of the aims of the Society, and of course as money raising schemes without which, the aims cannot possibly be put into effect!

Working model layouts and a good photographic display, as well as all our vintage stock can be seen.  Please bring your friends, neighbours, etc.  A small admission fee will be charged, which we hope to help boost our funds with (as preservation is a costly business).

Refreshments will also be available.  Members who could, or wish to volunteer their services on either day should contact the Hon. Sec. — Please help!

A small party of Midland Area members paid a visit to Lord Lanesborough’s ancestral home on Saturday, April 27th.  His Lordship entertained members by operating his extensive model layout.  This was followed by a trip to Swithland sidings, where his Lordship answered questions on the Great Central line; he also outlined the Great Central association’s scheme for the takeover from British Railways.

The Hon. Sec. proposed a vote of thanks to his Lordship in allowing members to visit the hall and sidings, the party then continued to Mountsorrel Granite Quarry to inspect the workings and railway installations.

BR are continually pressing for the final payment on the Midland Royal Saloon, some £240 is still owing on this vehicle and we would remind members to make a special effort and donate to the fund in order to clear the account.

Other items awaiting purchase include a LNWR lower quadrant home signal and a Midland dumb buffer crane, which the Society hopes to put to good use. The cost of the crane being £8.  A small fund for this crane has now been launched, and £2 has already been donated, we should like to cover the cost of transport for this very interesting relic.  All donations to the Hon. Treasurer please.

Thanks were expressed in this important National Report for the work that the Midlands Area of the RPS and the Stafford Railway Circle had done jointly in the survey of Railways for the Industrial Revolution section.

The Warwickshire and Worcestershire (May) Magazine have included an article on Lord Lanesborough and also mentions the Society.  There will be a follow up article in the June Edition with pictures of the RPS in action at Hednesford.

This line has been offered to the Society by the NCB for the very low rental of £10 per annum, other extras such as maintenance, fencing, etc. are not included.  A resolution was passed at the last committee meeting that the Society accept this very reasonable offer, a further meeting with the NCB to discuss the legal and other aspects is to be conducted very shortly.

There are still seats left for the GC Tour on June 15th — book yours now if you have not already done so!