Anything from a button to a branch line

Yes, we are interested in anything of railway origin and historic interest.  We have no prejudices.  We are anxious to preserve all classes of relics from all pre-grouping companies, the big four and British Railways.  In fact, we want to build up a truly comprehensive collection of relics that will form a supplement to the British Transport Commission’s own invaluable collection of historic relics.

At the moment we do not possess either a button or a branch line!    We own about 50 relics from the range in between these two types.  Our largest is a 6-wheeled carriage, and we expect that we shall soon have satisfactory accommodation for this so that our members can work on its restoration.

The rest of our collection comprises small items, and until we have acquired the necessary rail space and land, we cannot expand our collection of large relics.  Both the West Midland and London & Home Counties Districts are working on this problem, and both hope to be able to announce a satisfactory conclusion to their searches.

We already have our eye on a few larger items such as signals, 4-wheeled, 6-wheeled and bogie coaches, as well as goods vehicles.  The number of larger items we buy each year is governed by the speed by which our membership grows.

Once again we are enclosing a second copy of this newsletter.  Please pass it on to somebody who is interested in the activities of the only national society dedicated to the preservation of standard gauge relics.

Outing to the Much Wenlock Branch, Saturday, 19th September.

A rather small but enthusiastic party attended the District’s first get-together and outing, exact figures being seven members, plus seven relations and friends.

The smallness of numbers did not mar the day, however, and a very enjoyable time was had by all.  The main party started from Stafford station and was joined by another member at Wellington.  The Station Master at Wellington came over prior to departure for Much Wenlock; he appeared most sympathetic to our aims, and reflected sadly on the closure of branch lines.

The train pulled out on time from Wellington, headed by a 57xx class pannier tank No.3732.  The quaint halts en route to Buildwas Junction were noted, the driver, leaning through his cab window, pointed out several places of interest.  Coalbrookdale Iron Works were keenly watched by members, with interest in the fact that the first iron bridge in the world was cast there.  This was seen spanning the Severn as the train passed over a parallel bridge further up-stream. 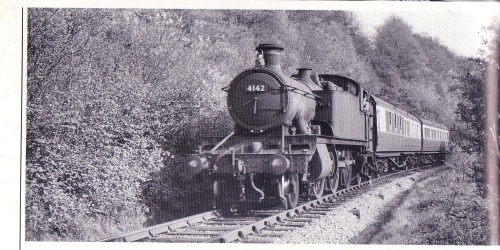 This delightful photograph epitomises the action on so many evocative branch lines in the West Midlands.  2-6-2T No.4142 was running under easy steam at Farley Dingle on 23rd April 1957 on a Much Wenlock to Wellington afternoon local service.  As so often happens when rural railway services are withdrawn, the trackbed was transformed into part of the modern road system.

Buildwas Junction proved of interest, an ancient wagon turn-table being spotted, also the two platform levels, one for the Wenlock branch and one for the Severn Valley line.

The train passed Buildwas Abbey, a very picturesque sight on the west bank of the Severn.

The gradients and curves then became very pronounced as the train made its way to the Wenlock terminus through the beautiful Shropshire countryside. 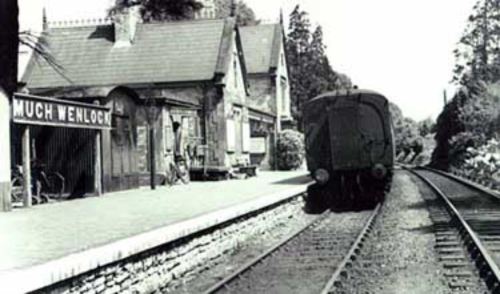 A member living at Much Wenlock met the party on arrival and very kindly took four members to Longville in his car, this line being open to freight only.  This excursion through the lovely Wenlock Edge was greatly appreciated.

The goods yard, sidings box and single engine shed (without loco) were inspected by the remaining members.  The ladies of the party visited the ancient Guildhall and Abbey, which proved full of historical interest.

After tea and a final look around Much Wenlock station, the party caught the 7.05 back to Wellington headed by the same pannier tank, but a different crew.

A vote of thanks must be recorded to the BR Staff at WR Wellington, for the kind way in which they answered questions, thus making the trip thoroughly worthwhile.

It is to be hoped that another outing of this nature will be better attended so that the RPS will continue to thrive and gain more publicity.  How about it, WMD members.

Description: Buildwas Junction formed part of the Severn Valley line that ran from Hartlebury, near Droitwich, to Shrewsbury through Bridgnorth and Ironbridge. However, the line was disbanded in 1963 following Dr Beeching’s review of the railways. A section of track between Kidderminster and Bridgnorth has been preserved by the Severn Valley Company, but the track from Bridgnorth onto Shrewsbury was pulled up in the 1960’s and can no longer be used.