This Midland Railway ‘Stop’ sign was from Derby No.4 Loco Shed and bought at Derby some years ago.  It is made from wood and has cast iron lettering.

In the days before World War II and the large-scale development of synthetic materials, the railways used a huge number of cast iron signs and notices. Each company either had its own foundries or employed local contractors, and it was a relatively simple job to make a wooden pattern and pin to it a variety of lettering which could be bought from various companies. 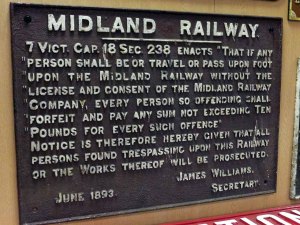 These two cast iron signs have been with the museum for many years, and apart from their Midland Railway origin, we do not know where they came from.

Railway workshops and engine sheds yielded a plethora of notices giving directions, machinery instructions, general restrictions, safety warnings and even the amount of time allowed for using the lavatories.