A book has been donated to the Museum, described as a ‘Treatise on Cast and Wrought Iron Bridges & Girders as applied to Railway structures.’

Compiled by William Humber in 1857.

It is a substantial book, measuring 15″x 11″ and was donated by Chris Browy of Norton Canes.

Amongst numerous descriptions of works are two local bridges: 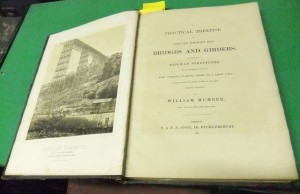 This Aqueduct was erected to carry the Walsall and Birmingham Canal over the Bloxwich Branch of the South Staffordshire Railway.  The work had to be completed before proceeding with the railway cutting to prevent interruption with the canal traffic, and also the supply to a water wheel, situated some distance below the ground of operations, in which the canal company was interested.  Considerable difficulty was experienced in carrying out the work, because of the unfavourable nature of the soil, which was loose, sandy and, to some extent, marshy; increased by the continual sinking of the banks, caused by the coal and iron pits, which undermine the whole district.

The aqueduct is carried at right angles across the railway in two spans, each 14 feet wide, by 15 feet 4 inches from the level of the rails to the bottom of the girders.  The trough 20 feet 4 inches wide by 5 feet 6 inches deep.

This bridge was erected for the purpose of carrying the Cannock Branch of the South Staffordshire Railway over the Wednesfield Branch of the Birmingham Canal. The peculiarity of this case consists in a better distribution of the metal in the top flange of the girders by which means the liability of that member to buckle when subjected to severe strains is in a great measure obviated.

The railway crosses the canal at a very acute angle, and to obviate as much as possible the effects of unequal deflection, each line of rail is supported by independent platforms so as to form two distinct bridges.  The longitudinal or main girders are 63 feet 4 inches long, having a bearing of 6 feet at each end on the abutment, so that the span is only 51 feet 4 inches.