One of the longest Mercians so far, but the first three pages were taken up by an article on railway preservation in general in the early days – I’m afraid that I didn’t manage to read it all.

There are three articles which I shall reproduce, two about other branch lines and one about steam locomotive classes from a ‘leisurely’ era.

This post just contains the officers’ reports, which give an indication of progress being made by the Midlands Area of the Railway Preservation Society, especially concerning the transfer to Chasewater.

From the Chairman’s Report. – A.L.Holden

Since my last report, developments have been going ahead at Chasewater, the track, having been inspected by a British Railways Permanent Way Ganger, was found to be in better condition than hoped. Weeding and general tidying up has been started by various members but more willing hands are needed to help carry on this operation.

A meeting will be held at the Lamb and Flag Hotel, Little Haywood to discuss track maintenance with a professional P. Way ganger.

The proposed visit to the Talyllyn Railway will take place on Sunday, September 5th – tickets priced at 15/- (75p).

Nant Gwernol station is the end of the line for the Talyllyn Railway and the locomotive is run round the coaches to pull them back down to Tywyn Wharf.

© Copyright E.Gammie and licensed for reuse under this Creative Commons Licence

Our open weekend held on the 19th and 20th June was a reasonable success.  A lot of members’ faces were absent, but a very grateful vote of thanks to all who helped.  These I may add were the usual working party, committee members and wives.  Several new members were enrolled, this is always encouraging.

Special mention should be made of the interest that was shown at the Kingsmead Secondary School, Hednesford ‘After School Activities Exhibition’, some 30 societies exhibiting, including the RPS.  Some good work was put in by school members of the RPS, Brian Hames and Frank Craddock, in manning our stand.  A very good job has been done by Stephen Ferreday in casting an axlebox cover for the Maryport & Carlisle Railway coach; this is an extremely good replica of the original.  We’re all very indebted to these junior members.

We hope to announce some definite progress re. Chasewater building in the near future and we do appeal to any members who have time on their hands during the summer school holidays to write in and offer their services.  Mention must be made here of the very useful restoration work put in by Mike Lewis, Vivian Miles and Maurice Harper during their annual holiday.  We are most grateful to these members for the giving of their time.

A special membership drive is envisaged in the near future, a membership build-up being vital in order that the Chasewater project can be carried through to its successful conclusion.  The success stands or falls by the determination of society members.

Generally speaking, the year has been quite a good one but we do need more members.  This is where everyone in the Society can play a part.  Our nucleus of working members have, over the past few years, introduced a number of people to the Society.  It would be a great help if people who lived some distance from the depot could recruit more members in their own area, even if they cannot visit us very often.  We do not expect everyone to come and work at the depot each week although we are delighted to see new faces.

Please go round to your friends who may be interested and sign them up.  It’s their subscription we want when all said and done!  Some people offer the lame excuse that they cannot join the society because they are unable to take an active part.  This is ridiculous! If everyone adopted this attitude there would be no railway preservation societies of any sort.  Everyone can help in some way or other and recruitment of new members is as good as any.  If you know of anyone interested, write to the editor and ask him to send details.

The more money we have, the more we can preserve, and the sooner we shall have our own working railway.

In this, my first report to you, I am pleased to be able to say that the negotiations regarding the financing of the building at Chasewater have been satisfactorily completed.

The target date for the Museum at Chasewater is April 1966.  This gives us only a short time in which to complete the building and to prepare the track. 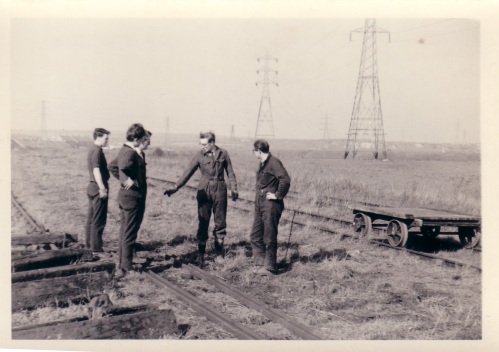 At the June meeting, where Mr. Gibson gave a lecture on the North Eastern Railway, I was disappointed with the attendance.  After much research work, Mr. Gibson’s efforts were heard by only about twelve people, and I hope that he was not too greatly embarrassed by this.

At the meeting on August 31st, Mr. C.A.Moreton will be motoring from Coventry to give a lecture on the North Staffordshire Railway.  He is an authority on this subject and I hope to see a great number of new faces there.