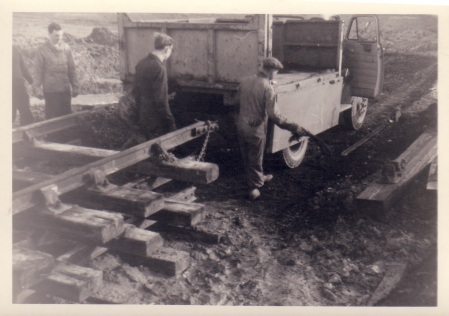 The Chasewater line is situated round half the perimeter of the Chasewater Pool.  The pool itself is now being extensively developed as one of the largest amusement areas in the Midlands, and to this end Brownhills Council is spending several thousands of pounds.  When development work is completed, it is hoped that a large proportion of Birmingham and area’s population will visit the pool annually.  It will therefore be appreciated, the great potential of a railway museum situated in this location, where there will be such a great concentration in the summer months, of day-trippers.

The proposed track itself was constructed in the main by the Midland Railway, and a small section by a colliery company.  The line was used for mineral traffic from the collieries, however a station was built at Brownhills, at which all passenger traffic terminated.

Due to our section of the line’s sole use for mineral traffic, the track is in a poor state of repair, the poorest part being from the marshalling yard to the north.  The main work therefore will be to relay the track in certain places, and clean out and in some places repipe the drainage system.

The work on the line will have to be completed by the end of 1965, if not sooner, depending on the closure of the connecting line by British Railways.  Therefore we will need everyone’s help to get the work done.

We will not be able to manage with the present sized work party of 14 or so members, as it takes these fellows every Sunday to keep the stock at the depot in order.  We are not asking you to attend every week, but if you could attend monthly or bi-monthly periods, it would help to clear up the situation tremendously.

The line is only one mile from Brownhills Station (BR – LMR) (Still a few months before closure!) and if you could see it, you would see its great potential if a success was made of it.  Success however can only be achieved with 100% help from YOU!! 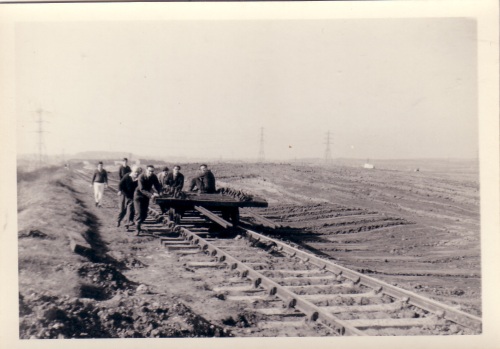 The National Coal Board has donated four NSR lower quadrant signals to the RPS.  They are in good condition, with only one exception, when on being removed from the site at the Pinnox Crossings (South of Tunstall Station in the Potteries), Burslem, Stoke-on-Trent, left its base firmly implanted in the muddy ground.

The largest of the four has been erected at the depot at Hednesford – an excellent view of the surroundings being commanded from the top.  We hope to plant the other three on the Chasewater Branch.

On a recent survey of the internal railway of Shelton Iron & Steel Ltd., several wagons and three box-vans of the North Staffordshire Railway were found.

After talks with the company, we agreed on the following:

It is probable that early this year we may be able to have a tour of their railway, which should prove far more interesting than it appears at first sight.  There are 36 miles of internal railway and there are still several steam locomotives operating.  The most interesting is perhaps an 0-4-0, which has a crane mounted over the boiler. (Now at Foxfield Railway, by Dubs & Co Dubsy to his friends!)

It is hoped that in the new year, meetings of the members who live in or near North Staffordshire will commence at bi-monthy intervals.  Interesting lectures are planned as well as slides and cinematograph shows concerning railway preservation.  Will any members who wish to attend please send a postcard to the Hon. Editor, who will send full details when they become available (emails make life so much easier nowadays!)

The meeting place is at present being arranged, and we need a good turn-out to make them worth while.  A small fee for admission may be charged, and any  non-members will be very welcome.  If you live within reasonable travelling distance of the Potteries, do try to attend.  I assure you that you will not regret it!

Then followed reports on various social events, including the first Annual Dinner and Social Evening, held at the Eaton Lodge Hotel, Rugeley.

At Hednesford, members are still working on the Royal Saloon and the TPO, and, as ever, more help is needed!