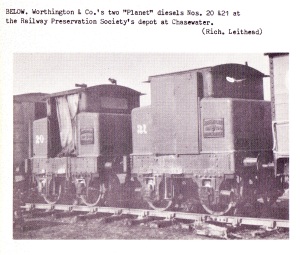 On 21 September 1968, the Society held its 9th Annual General Meeting at the Pear Tree Inn, Brownhills.  The attendance was very poor considering the attraction of a steam trip down the line afterwards.

After the meeting, sandwiches were supplied by Pete Parker, proprietor of the Pear Tree, and then members crossed the road where in brilliant evening sunshine stood the Andrew Barclay 0-4-0ST, (Colin McAndrew) immaculate in green and red, with polished brass and copper-work.

Members were invited on to the train comprising the Midland (or Coal Board) brake van, the Midland brake coach and the Great Western brake.  The train departed with Mr. Civil driving and Mr. Luker firing, the team, who with Mike Lewis had so painstakingly restored the locomotive.  She was opened up to pull the train up the 1 in 50 bank to the causeway causing the steam pressure to drop rather drastically to 40 lbs per square inch, but this is probably the longest run the loco has ever made without running over the same tracks twice, and its small boiler and firebox being designed more for a 3’ 6” gauge loco, this is not surprising.

Over the causeway, we ran on to the shore again until we were held up by some rather enthusiastic ditching by Bob Wormington, which caused the loco cylinders to come into contact with the spoil.  We ran on until we reached the end of the line, where a stop was made to raise steam for the return journey.  The loco was once again admired by the members, its rather peculiar mechanical pump a feature of interest on the running plate.

The return journey was made almost without incident, a point switched the wrong way round caused a minor sensation, but we returned safely to the Compound, where some rather complicated shunting was carried out before putting the engine to bed.  In fact, it was 9.00pm and dark when Laurence Hodgkinson finally put the diesel in with the rest of the stock which had been parked in the loop out of the way.

So ended the third RPS steaming at Chasewater, giving some encouragement to those who had worked so painstakingly to make this event possible.  But, it made one think about the amount of work still to be done, principally on track, but also on locos and stock before these steamings become a regular feature.

In the Treasurer’s Report by Frank Harvey, it was noted that, among others, Mr. R. Duffill  joined the Society!