The Society is now passing through a difficult stage, this is common with individual members, indeed the country as a whole, is suffering from a severe depression with the economic climate.  The loan for our museum building has now been deferred, may we hope for better tidings later in the year?  We are, however, most grateful to members who are coming forward with loans to cover the cost of the museum compound.  Once this compound has been erected and the track into it laid, we should have two of the locomotives installed in the compound and ready for steaming.  The target date is late June and should not prove too difficult, if help, both financial and practical, is immediately forthcoming.  Your committee is working extremely hard, both on administration and practical work.  I therefore appeal to all members to back the committee and so push the work along faster.  A colossal amount of work has to be done this summer.  I am going to itemise the list of vehicles which require immediate attention.

From the Hon. Secretary’s Report

The work on the Andrew Barclay loco (Colin McAndrew) at Hixon is almost finished.

Trevor Cousens and Allen Civil visited Stewarts and Lloyds at Bromford Bridge to buy loco spares to replace parts on the Hudswell Clarke and the Barclay locomotives.

Early in March 1968 some track was stolen from Chasewater.  It has since been replaced and measures are in hand to prevent any further occurrence.  A security compound will be constructed in the very near future to house the stock there.

Slow progress has been made on the MR Royal Saloon, the clerestory roof has had pitch applied.  The damp has caused the roof inside to crack up.  We understand that work is now in hand to the two side panels which need attention.  The outside is now being given a coat of undercoat.

The LNWR TPO needs a good coat of red oxide, some of the woodwork needs replacing.  The roof has had some attention and is more waterproof.

The TPO needs a good sort out inside, with new relics arriving all the time, we are getting very short of room in this vehicle.  A great number of relics have to be stored because there is not enough space to display them.

The Maryport & Carlisle 3rd Class carriage is almost completed, the wheels need finishing with a white rim.  The underframes require another two coats of paint.  One door has been made complete by Frank Harvey and another door by Laurence Hodgkinson – this needs to be hung.

It is hoped to move the Midland Railway crane to Chasewater in the near future, where it will be used for track laying purposes.

The Midland Railway Crane at Chasewater 1969

The Midland Railway horse drawn delivery van requires another coat of paint and the roof needs re-canvassing.  Two of the wheels need repairing.  (I knew that we had this van, but I’ve never seen it and have no idea where it came from – there has been nothing in the magazines so far.  It is now on loan at Shugborough)

At last we have permission to start the compound, I hope work will commence within the next month as so much depends on getting this site ready for steaming of locomotives this summer.  I think it is most important that we make an effort to attract the general public.

New arrivals this summer (all being well) will be a bolster wagon from Holly Bank and the Midland Railway crane from the Hednesford depot.  We hope during May, the Neilson from Glasgow and a Hawthorn Leslie from Manchester will have arrived, and there is also a likelihood of two salt wagons from Sandbach, Cheshire; and providing suitable transport can be found at a reasonable cost, the Manchester, Sheffield and Lincoln coach and the South Eastern and Chatham Railway brake from the Derwent valley should also be here by the late summer.  (There was an appeal for £400 for the transport costs later in the magazine.) 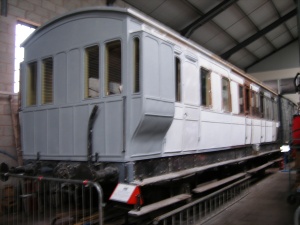 MSL Coach in the Heritage Centre 2010

Track clearing is still making steady progress, although there have been one or two setbacks, e.g.  the extensive re-packing of the point at the south end of the passing loop, due to the continual burning of the bank; the work has now been successful.  The latest bit of vandalism as you no doubt have read was the removal of three lengths of track from the north end of the line by people of low moral character (I would have expressed it somewhat differently! Starts with a ‘b’ and ends with an ‘s’!), resulting in the derailment of the tool van and the flat wagon.  This has now been completely relaid.

During the next two months a total of 1053 feet of track has to be lifted and relaid on the compound site, as you will no doubt gather this will require a great deal of hard work by the Chasewater working party to meet the deadline, and we would appreciate very much the appearance of members whom we have not seen so far.

Due to the rapid expansion of the relics at both Hednesford and Chasewater, I think the need arises in the centralisation of work at these two depots.  There is a strong case for forming various departments i.e. loco footplate crews, signalling department fitters and permanent way staff.  If anyone has any ideas on the above departments, please let Frank Harvey or myself know.

This article was written as an appreciation of the work done at Chasewater and Hixon towards getting the Chasewater site and loco ready for steaming later this year (1968).

But it also asked for more work to be done at Hednesford, as the state of the Travelling Post Office and the Royal Saloon was giving rise to some concern.  Mr. Siberry was asking for a weekend in May to concentrate on painting these two items.

There are still more articles to come from this edition – about the Hudswell Clarke, the Neilson and the Chasewater Line – not to mention the stock-list!