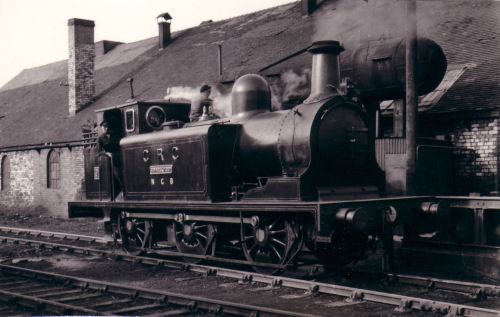 Asbestos – The renewal of right hand hornblocks is complete and the wheels have been replaced.  A trial steaming is scheduled for June 5th and it should be in steam for the Chasewater Festival on July 8th.

Neilson – No work has been carried out for two years.  The saddle tank was removed and ten studs drilled out of the sides of the boiler and new ones fitted.  These studs secure the water feed clock boxes, stolen before the loco left Glasgow.  Fortunately Trevor Cousens was able to obtain replacements for us.  Shortage of labour has precluded further work being carried out but we hope to restart soon.

E1 – No change.  A boiler survey may be made soon.

Barclay – The firebox was condemned at its last boiler test.  As the ‘Barclay’ soon to be delivered is of similar size, it will be used to supply spare parts to keep the newer loco running.

Hudswell Clarke – No work has been carried out for over three years. A hydraulic test was carried out and the results were not promising.  The boiler will need re-tubing and a considerable amount of mechanical work will be necessary. 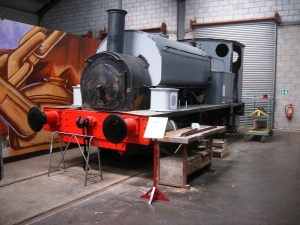 Sadly she hasn’t steamed since she’s been at Chasewater.

Petrol No.1 – The petrol tank and associated plumbing were cleaned out recently and the engine run.  It will start by hand when warm.  Unfortunately the carburettor appears to be icing up when the engine is subjected to load.  The carb. Is probably not the original and information as to the whereabouts of a replacement would be welcome.

Diesel No.1 – Out of service with a smashed axlebox.  Once again information as to the whereabouts of a replacement would be welcome.

Diesel No.20 – One of the spare engines is being overhauled ready for fitting.  Messrs. Bass Charrington have kindly donated a quantity of their blue paint and both locos will be painted when time permits.

Diesel No.21 – An overhaul was carried out last year, the cylinder heads and fuel pump being renewed, and more recently repairs were carried out to the clutch once again.

Royal (or Special) Saloon – On loan to Derby Corporation for the Midland Railway Project.  They have undertaken to restore it

TPO – The small relics collection now looks quite orderly though the outside of the vehicle is in urgent need of attention.

LNWR 50’ Brake – One end has been painted out and will be used this summer to house the sales stand, a model railway and a display of relics.

Maryport & Carlisle – Restoration is nearly complete.  The roof was covered with galvanised sheets last summer, but the completion has been held up by the weather.  It saw considerable use last year carrying passengers on Open Days.

Off to Stockton & Darlington for their 150th Anniversary in 1975.

GER Brake – Now in use again as the Mess (!) Van.  It is in urgent need of re-roofing.  The outside was painted dark brown last year.

MSL – No further work has been carried out.  The bearing brasses are missing.

LNWR Brake Third – No change.  The LNWR Coaching Stock Fund is attempting to raise cash for the restoration of this coach.

GWR Brake – The interior has been repainted and the roof covered with galvanised sheets.

MR Crane – A new wire rope has been fitted and the woodwork painted.  Although it is 90 years old it still sees considerable use.

LYR Van – Now in use as a workshop and tool store.

MR Van – In use as a stores, mainly diesel.  It has been painted externally.