More than a third of a mile of track, including 3 points and 2 buffer stops, have been donated to the West Midlands based Chasewater Railway.

The gift has been donated by Synthetic Chemicals of Four Ashes Works, Staffs.

The track was dismantled by Chasewater members over two weekends with the cost of lifting, together with labour, borne by Synthetic Chemicals, while transport was supplied by Chasewater.

This is the largest donation of its kind that Chasewater has received and is mostly due to the efforts of Jim Bates, and employee of Synthetic Chemicals and a long-standing member of the standard gauge metals railway.  He found that the sidings were to be dismantled, approached his works manager on behalf of Chasewater and together with officials from the railway, obtained the track.

The majority of the track, which had been refurbished in 1989 but never used, was moved in 60ft panels on May 21, although not officially handed over till May 27.

The panels were transported to the causeway and lifted off by a crane supplied free of charge after a request from the Railway’s general manager Steve Organ, by Midland Safe Loads Ltd, Brownhills. 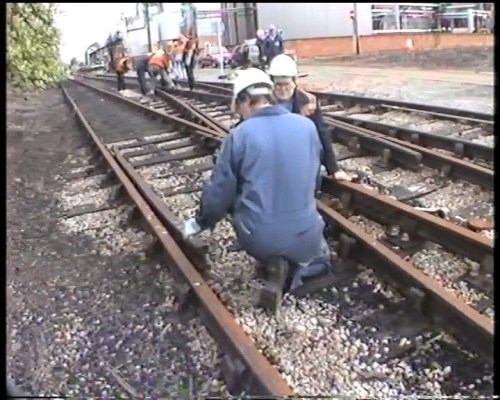 Although not all the track is on site at present from Four Ashes, the amount delivered, with the track from Redditch Railway Society, is enough to lay the line through to Norton Lakeside.

David Bathurst, Chairman of Chasewater Railway, said “We are overwhelmed by the quality and the length of track donated to the railway and also the cost of lifting it, for which we are very grateful.  We also know that this is not the first time that Synthetic Chemicals have made such a donation to a railway.  They presented their 0-4-0F Barclay built in 1944. to the Telford Steam Trust in 1992, but I would also like to thank Jim Bates for the effort he has put in…….Jim fixed it for us.”