On Saturday April 20th 2013, Chasewater Railway played host to the Industrial Railway Society, when they held their Annual General Meeting. The day started at 9-oo am with refreshments in the Sidings tea rooms, and a general meander around the site. A sales stand was erected in the Heritage Centre. 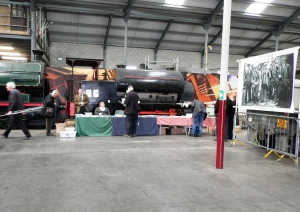 At their request a special train was arranged to depart at 10-30 am. Seating accommodation was by means of railway benches fitted into 2 open type industrial wagons, with a brake van on either end.

Motive power was provided by top and tailing with Andrew Barclay No 1223 Colin McAndrew,

and Robert Stephenson & Hawthorn No 7684 Nechells No 4.

The train headboard for this occasion was the BLC plaque, as the IRS was originally known as.

A video of the departure can be seen on oakparkrunner’s you tube site.

On their return there was a demonstration and journey on the narrow gauge line, using Ruston & Hornsby loco No 441424, Ex Caphouse Colliery.

Further refreshments in the sidings tea rooms, and a further train journey concluded the days events.

This entry was posted in News. Bookmark the permalink.