This post pre-dates the previous one, which set out the way of thinking when this post was written.

Taken form the Mercian of January 1969

This article was written by Trevor Cousens, Hon.Sec. at the time, and looks forward, after the railway had been in operation for almost ten years, to how things may have been in another thirty years, 1998.

Reading it now in 2010 it gives a fascinating insight into what may have been expected or, at least, hoped for, some time ago. 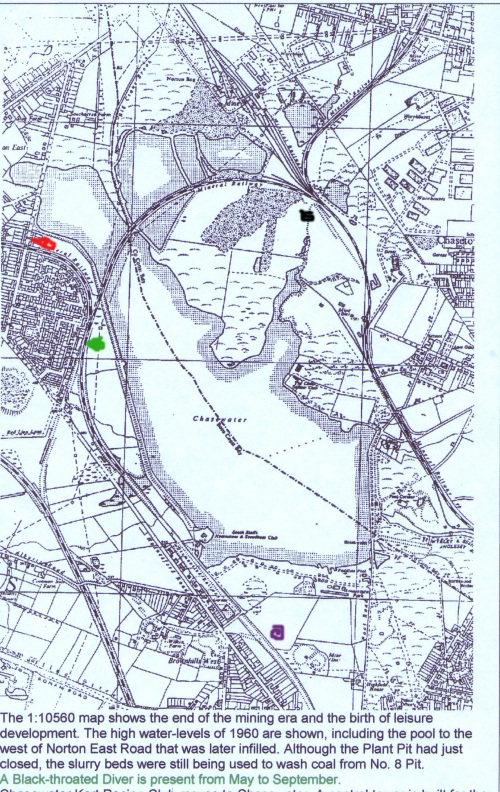 The purple mark is where Brownhills West used to be.  The red mark would have been Norton Crossing.The green mark – Norton Junction and the black mark Norton East.

A glimpse into the future to show what might happen IF we could have more working members.

The scene, a fine May morning in the year 1998, the time 8.30am – a Saturday.  A group of members are just putting the finishing touches to the paint of a little halt known as Brownhills West.  The E1 stands glimmering in the early morning sunshine, fresh from its overhaul with a set of two corridor coaches in the maroon and gold livery of the Chasewater Light Railway Company.

In the distance there is the sound of a hydrofoil being started up in preparation for the day’s big event on the lake – the International Hydrofoil Race due to start at 10.30am.

A restored vintage train of coaches is pulled out of the museum building by diesel No.20, these coaches are for a special train in the afternoon when a visiting Society will be taken down the line; but first they have to be cleaned.  There are four six-wheeled vehicles and a four-wheeled brake van from five different pre-grouping railways, and not one under 70 years old.  Several members are concentrating their efforts on raising steam with the Hudswell Clarke of 1895 vintage, which will haul the special.  In her old livery of apple green with white lining she looks rather splendent.

Passengers are already starting to fill the waiting two coach train standing in the platform, the booking office and sales counter are already doing brisk trade.

At 9.00am, the E1 with a toot of her whistle and a wave of the flag from the guard draws out of the station on the first journey of the day to Norton Junction and Norton East.  The journey is but two miles, but this takes 25 minutes with a stop because of the Light Railway restriction of 15 mph.

The E1, with her injectors gurgling and safety valves occasionally blowing off, pulls towards ‘Entrance Crossing’ where the North Staffs crossing gates are signalled by North Staffs signals.  The signal is for us as the gates are open; a queue of cars is waiting to cross into the park.  We gather speed over the small bridge on to the loop; here we notice a small permanent was train standing, compromising of a small Peckett, a crane and some flat wagons, with a tool van in the rear.  They are waiting to follow us on to the main line to replace some rotten sleepers.

At Norton East we stop, nobody boards and nobody alights, it is a timetabled stop.  In the afternoons a shuttle service is operated from Norton Crossing to Norton Junction to connect with the main line to bring people into the park by railway, the authorities allowing this for a portion of the receipts.  The Peckett we noticed on the works train will be train engine on this push-pull service.

We pull out of Norton Junction up the 1 in 50 incline, on to the causeway, which divides Chasewater Pool.  Poplars have been planted here as a windbreak.  Over the causeway now we catch site of the small bathing chalets and notice one or two early swimmers.

Into the long cutting with its long grass and myriad of flowers and insects and we finally pass the loco shed at Norton East into the terminus.  While we are waiting for the engine to run around the coaches, we have a look around the engine shed; the Barclay is undergoing a boiler washout, so it is rather damp and messy inside.  The shed is quite a simple affair comprising one road capable of holding two saddle tanks, a pit underneath the track, a small workshop adjoining the main building, a bucket coaling stage outside and a 5,000 gallon water tank.  ‘Asbestos’, the Hawthorn Leslie stands at the back of the shed awaiting new tubes and a forlorn Peckett stands on a spur behind the shed awaiting overhaul.  Just in front of the shed are two piers built alongside the tracks with a piece of rail concreted between them for lifting boilers, etc.

The engine whistles, so we dart back to the sleeper-built platform – there is no station building here yet – and on to the train.  We start back at 10.00 am calling at Norton Junction again – the platform is triangular to serve the branch to Norton Crossing as well, the building is of prefabricated construction until a GWR type of building can be erected.

After departing from the junction we pass a small ground frame controlling the junction point and signals; we are then brought to a halt in the loop, where after five minutes, we look out of the window to see a small plume of smoke approaching; this is the permanent way train drawing into the loop to leave the line clear.  A green flag is waved, the signal drops and we once again cross the bridge and ‘Entrance Crossing’ back to Brownhills West.  The engine is uncoupled and runs up to the compound gates for water, we follow it and pass through the gates where we notice the Hudswell Clarke and the vintage train being cleaned in the siding.

We go into the museum for a look.  As most of the items are in use today, we see the LNWR compartment coach completely stripped down, the MR Royal Coach awaiting one or two finishing touches and the LNWR Travelling Post Office coach completely restored in its former livery.  These are the only vehicles at the moment in the museum, but there is room for the three six-wheelers in here also.  The walls are covered with historic photographs, plates, documents and drawings, whilst there are glass cases holding some small items such as block instruments, tablets, etc. The building is of concrete blocks with Perspex roof-lights and also with daylight balanced fluorescent lighting so that the colour of the liveries can be seen accurately.  There are not many people here, it is a bit early yet for visitors, and the staff are having a cup of tea with our engine crew in the Great Western brake van standing just outside,

Now it is lunch time, so we depart, having had a really enjoyable visit; the people are beginning to flock on to the 1.00pm train, we have done well to miss the crowds.  We hand in our ticket and make our way to our Turbocar!